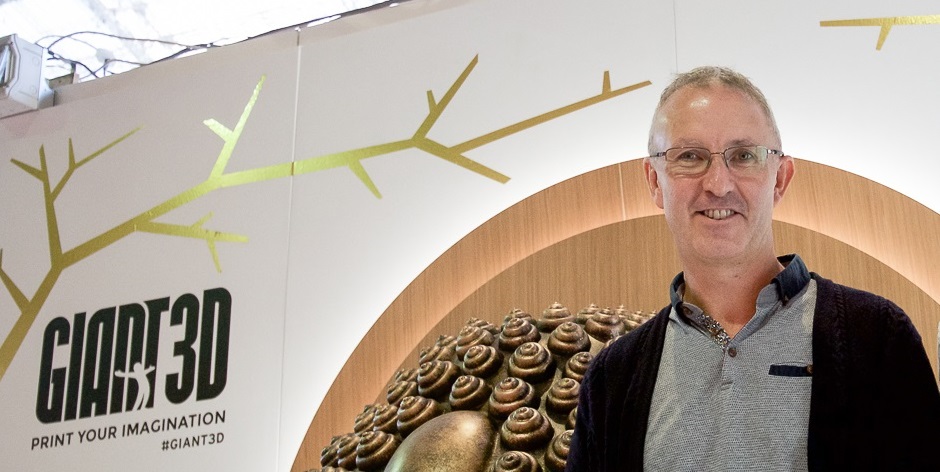 Think of 3D printing, and you might well think of high-profile news stories a decade back involving airport security and ‘printed firearms’. Rest assured, the technology has moved on considerably since those burgeoning days. And one of the pioneering companies has been Stylo, the Hertfordshire-based print firm, which is now at the forefront of some incredibly exciting possibilities in three-dimensional printing.

Stylo has been in business for nigh on twenty years, starting out from humble beginnings – “…all from a spare room in my flat”, Simon tells me – to now being one of the leading UK names in the print industry and employing dozens of people.

“The original key markets for us were exhibitions and events. Also, we manufacture in-house – mainly so that we can control the quality and delivery of anything we do. The benefit of that has been developing the technology in line with the demands of the clients, mostly retail, that we’ve built up over 20 years of being in business, and have been with us since we started – like Café Nero who have been with us since the beginning.”

A lot of that work involved two-dimensional work for retail shopfitting and display, and Simon admits that two-dimensional is still a big part of Stylo’s remit. But over the last two decades, the firm has moved into various other areas.

“Since then, we’ve realised that a lot of the work now required from clients has been moving into three-dimensional. We found there is a strong niche in taking everything we do in 2D and giving some dimension to it,” Simon says. So, how did they go about achieving that? 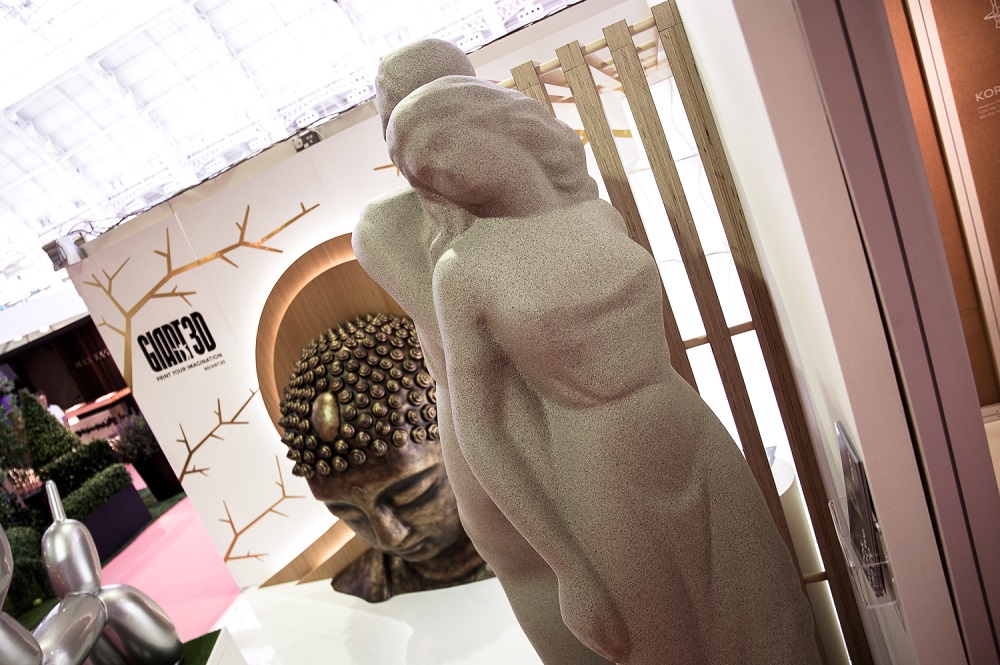 Some examples of the breadth of work possible using the technology…

“About two years ago, we created a 3D design team and the logic behind that was we could take our 2D print work and add to it around fabrication and construction. We told our 3D team to monitor where the technology was going – and we didn’t think small-scale really had a place in our markets, so it’s all about large-scale. So, our team is self-taught, really, in taking a 2D image and turning it into a three-dimensional shape – which involves a lot of computer-generated-imagery – creating an image and then printing it in 3D,” he adds.

Realising the potential of the technology led Stylo to join forces in 2015 with Israeli company Massivit, who themselves had been carrying out research and development on large-scale printing solutions, which fit the bill for Stylo perfectly. “The key things for us in printing large are speed and being lightweight – especially if we were installing something like a sculpture in a hotel for example. If the item weighs half-a-tonne the logistics are just too difficult to manage. Being lightweight, it needs to be hollow, which is vital and something Massivit’s technology allows,” Simon states. 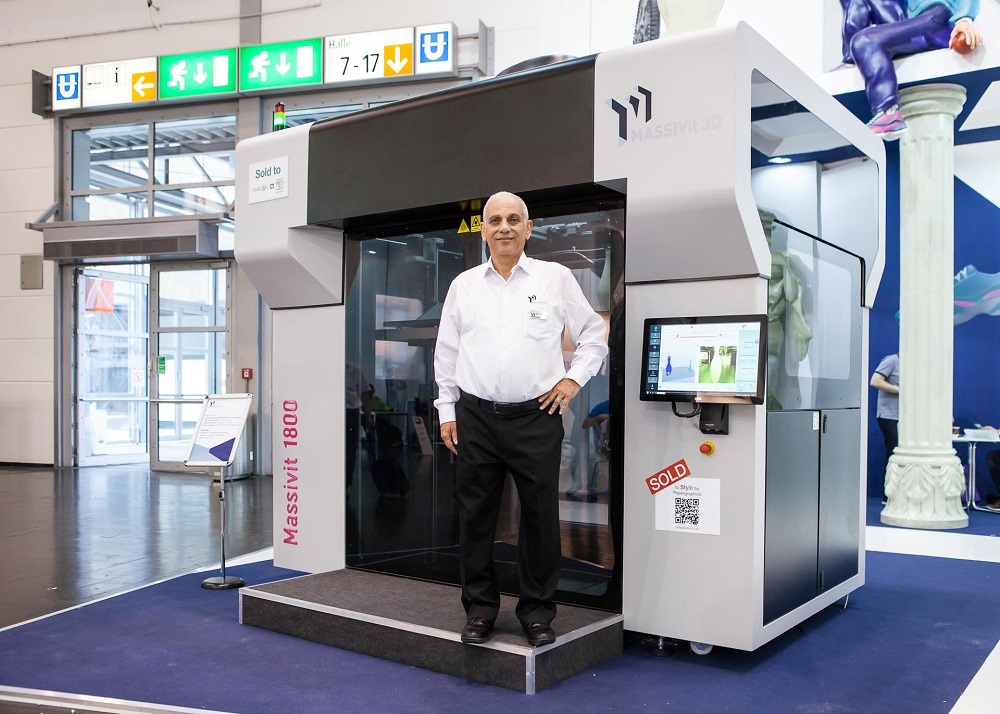 Indeed, traditional 3D printing involves building layers upon layers, to create a solid unit, which would take far too long. Simon explains: “We needed something that allowed us to print 10 times faster but also using a tenth of the material, which is what this technology allows us to do – integrate our 3D design into a hollow structure. It also cuts down on costs when quoting for clients – for something that is eight-foot high; if we used traditional methods that would cost something like £25,000 which you and I both know is never going to get approved!”

With only a handful of machines being installed globally, being the first UK adopters of the new technology has allowed Stylo to carve a niche and gain a market edge. Something Simon takes pride in: “About 15 years ago, print industry took a turn towards direct printing. Before then, anything that was printed had to go onto a bit of paper, or vinyl or some sort of surface, which in itself would then be mounted to a rigid surface. So this method of direct printing changed the game – getting there ahead of everyone else means we’re challenging ourselves internally with how we can push technology, we’re never quite satisfied with just doing it the same way as everybody else. Even Buckingham Palace think we’re innovative as they awarded us the Queen’s Award for Innovation!”

——
How the technology works…

So can this be applied to hospitality? Work in the hospitality sector has started to come in; Stylo recently worked on a 2,000-room project in the far-east providing 45,000-sq-metres of printed wallpaper – but there is so much potential in this sector according to Simon.

“I have to say that we are still really early in terms of applying this technology to hospitality. All the people who have bought these machines have either bought them for a specific purpose to complete a specific task or they’ve bought them in an entrepreneurial spirit – like ourselves. We bought this technology thinking ‘it’s really cool, it’s really exciting’. We’re saying now that if we could get into the early design stages of hotels, especially in boutique and independent hotels, where creating a personalised identity for every room is key – even if it’s only a 30 or 40 room hotel – it could be really cool to have an individual statue for each room for example.

“Or in the entrance to a hotel, having a really quirky feature that strikes visitors as soon as they enter. And even in the gardens – we could use our Buddha head, that we’ve been showing off at shows recently, around water features. It’s about creating that initial ‘wow factor’,” Simon says. 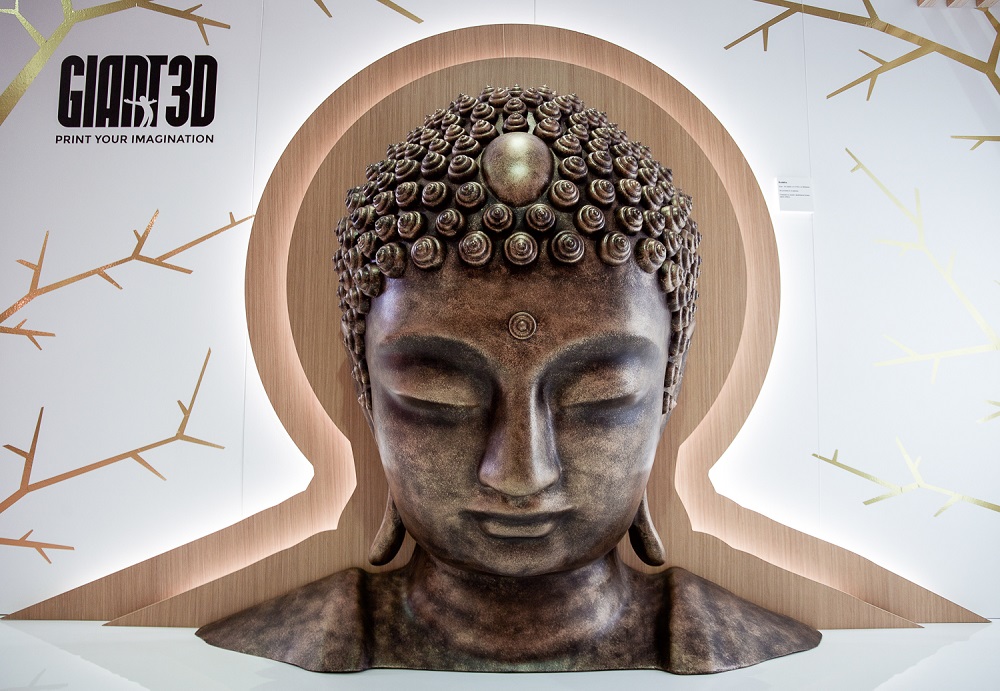 For this Buddha head, Stylo worked with Anarchy, one of the UK’s leading model making company’s based in Watford, who took Stylo 3D print and used it to create a fibre glass mould from which this Model was cast. This makes it externally durable and can be quickly and cost effectively re-produced re-using the mould time and time again…

Getting in with designers is now the priority for Stylo. Simon believes that once the technology is ‘out there’, it will be about convincing design professionals of the creative potential of its applications. “Having a discussion purely from the design perspective about doing things on an enormous scale, completely random things and off-the-wall things is what we want. So it’s about working with designers to come up with these ideas and then us showing them the capabilities of creating some really unique pieces,” he adds.

The production benefits are definitely there to be seen also. The ‘additive’ method of production – namely starting with nothing and building into something, rather than starting with something and taking away – means hardly any waste and its lightweight nature means transportation savings, which both tick environmental and sustainable boxes. Furthermore, Simon is proud of the fact that artisanal skills will still be maintained. Once a piece has been printed, the finished article still retains the look of the UV gel. Yet, each piece can be finished in countless styles to request – and having seen the giant Buddha head (above) at the recent 100% Design show, Hotel Designs can vouch for the quality of the finish. It also means each piece, even if identical in print, will have a slightly unique look. 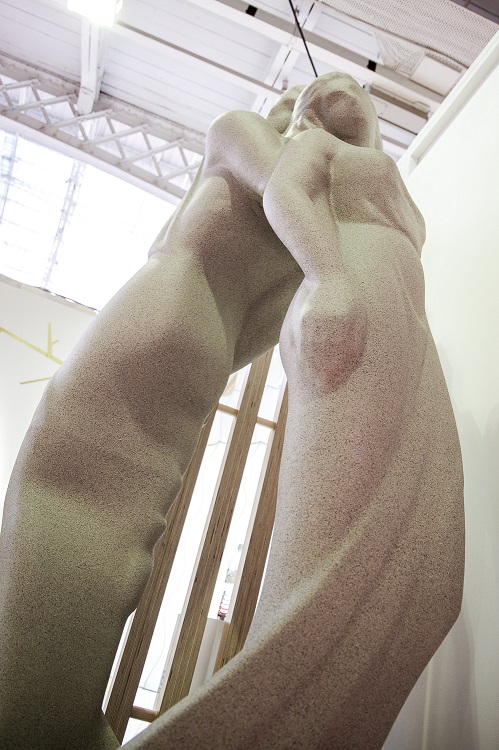 Is Simon tempted to bring design in-house at Stylo and come up with and create the ideas themselves?

“It’s a fine line, because if we play the role of designers as well as producers, we run the risk of stepping on the toes of our clients. I personally love design myself, but one of the downsides of being a production-driven company, is that if we are designing as well – we are going to be designing in a ‘production-friendly’ way. So what we want is designers to not have to worry about how the items will be made – they should have free rein to do whatever they want. It’s our challenge to take their concept and then our 3D designers can turn that into something ‘producible’.”

The enthusiasm for the technology and the endless possibilities within the hospitality sector from Simon and his team is both audible and visible. And looking at some of the fantastic pieces they’ve created already, we have no doubts that it won’t be long before it becomes commonplace to see 3D-printed items in independents, boutiques and major chains – with Stylo continuing to be pioneers at the forefront of the field…