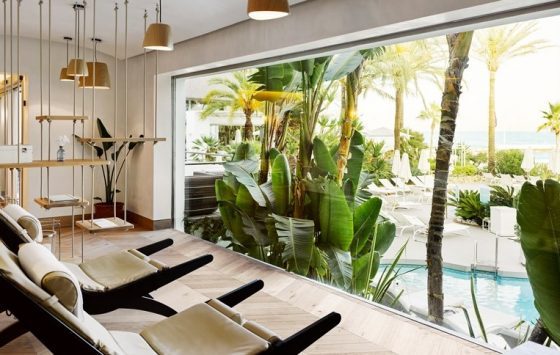 Robert De Niro, 74, has his fingers in a lot of pies. Aside from still making films, the budding entrepreneur has been working with the Nobu group to launch hotels and the next will open shortly in Marbella.

De Niro has worked with restaurant and hotel group before, and the style of this opening will be no different. Head chef Nobu Matsuhisa, behind the eponymous brand, will collaborate with De Niro and film producer Meir Teper to launch a Nobu-branded property, the company’s second in Spain.

Nobu Hotels, from a design perspective, have an contemporary industrial feel, with light, airy spaces, but they also aim in some way pay homage to their local environment too.

Naturally the luxury Nobu Hotel Marbella, due in March, will have a strong focus on the Asian-inspired food Nobu are globally famous for, and will be an adults-only set up.

The hotel will be relatively intimate, with 81 rooms. Opening on Marbella’s holidaying destination, the Golden Mile, the hotel has lifestyle elements like a golf course which will keep it open for all four seasons, even when the weather turns.

Talking of the brand’s interest in pairing local cuisine and culture with Nobu’s Asian heritage, general manager of Nobu Marbella explained: “This will be a lifestyle-focused hotel for adults only, with an incredible focus on food and drink, with Chef Nobu’s incredible input. Having spent a week with him in the region, I know he has come up with ways to bring a local Andalusian flavour to the cuisine.”

Further features include a roaming hotel cocktail trolley, DJ sessions and access to neighbouring Hotel Puente Romano, which has its own nightclub and exclusive restaurants.

Nobu’s expanding hotel empire includes properties in London, Ibiza, Malibu, Toronto and Barcelona. The group are set to launch in more destinations in the near future, including Los Cabos, Chicago and Sao Paulo.