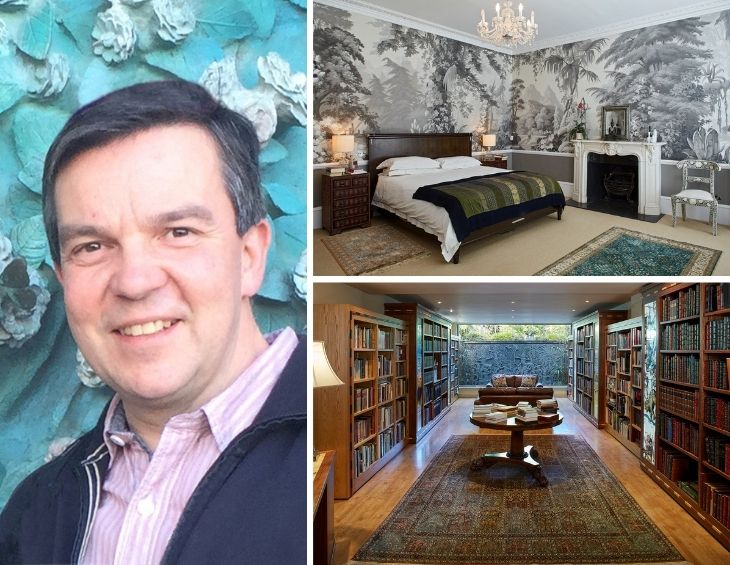 With an ever-evolving, burning demand among modern travellers to check into spaces that ooze personality, design and art work in tandem, as editor Hamish Kilburn learns when he interviews interior designer Steve Esdaile when establishing art’s role in tomorrow’s hotel design…

Esdaile Design is rapidly making a name for itself with interiors featuring bespoke art commissions at the heart of the designs. These stunning focal points that always provide an element of surprise are something of a signature of founder Steve Esdaile. From private residences and hotels to commercial and retail spaces, Esdaile is keen to add what he simply calls an element of personality.

These artworks wouldn’t look out of place in a gallery, so what inspired Steve to incorporate them into his designs? We took five minutes of his time to find out.

Hamish Kilburn: You’re a designer by trade but where did your interest in bespoke art commissions start?

Steve Esdaile: As an art and design graduate, I’ve always loved making things and really love the environment of an artisan workshop. This has extended into my design work where I enjoy bringing to life original and previously unrealised pieces of work. Given my interest in skilled art and craft, when I’m employed to present ‘standard’ products, I look to artists and craftspeople to add an element of ‘bespoke’ to the settings. 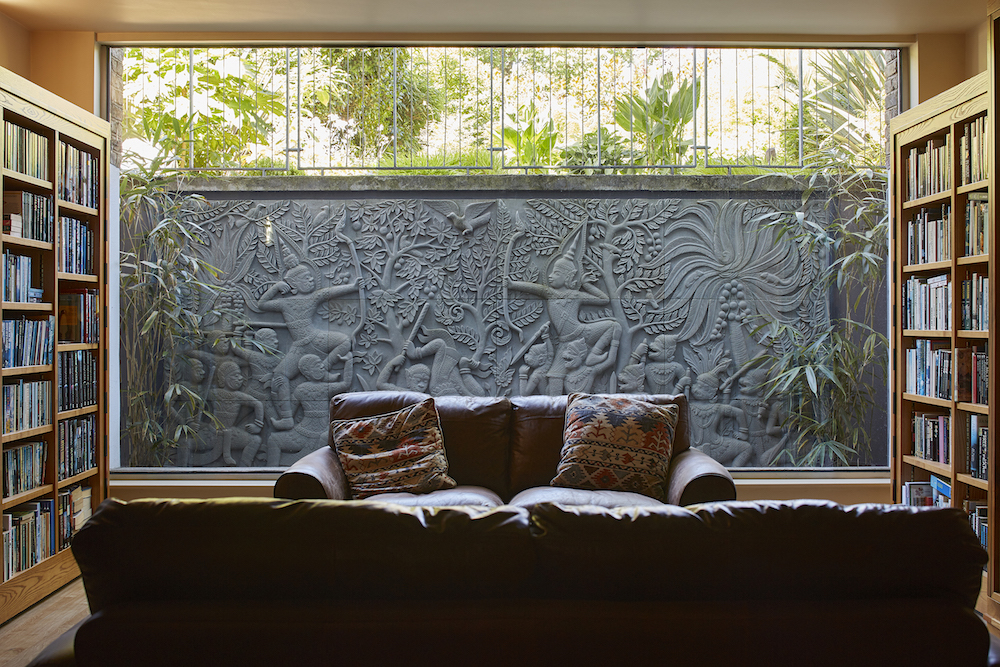 HK: Where do the ideas come from and how do you find craftspeople to work with?

SE: The ideas for projects are usually client-led initially. I’ll try and provoke a train of thought in the brief process – which could be an interest, reference point or emotion that the client would like to realise in the commission. And the craftspeople we work with tend to come via a recommendation from my existing contacts. Obviously, the internet can yield a broad scope of ideas and potential, but narrowing the field takes time and experience, and knowing what questions to ask is critical. My background in workshop manufacture is invaluable, as I understand the information a craftsperson requires. The best results tend to come from asking someone to do what they do best. 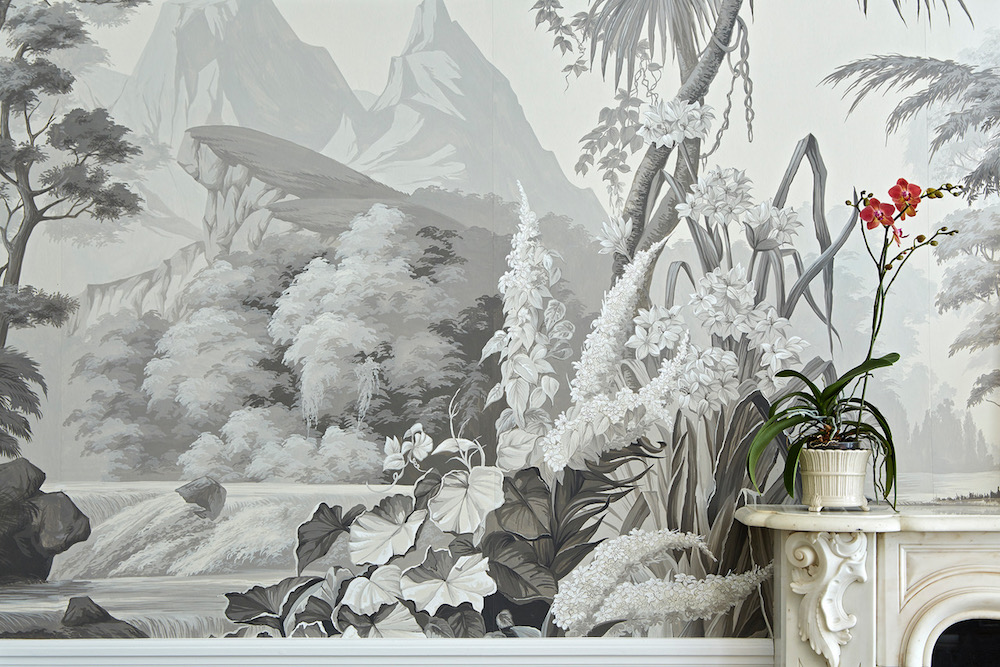 Image caption: Bedroom of a master suite in a Thames-side property. The monochrome hand-painted wallpaper in the bedroom was commissioned directly from the studio of a Chinese artist, and brings an exotic depth of field to the space.

HK: Can you give us as an idea of the range of materials and techniques you’ve incorporated into your designs?

SE: Within one Thames-side residence, I incorporated no fewer than five bespoke art pieces. For example, in the master bedroom, I commissioned a monochrome hand-painted wallpaper directly from the studio of a Chinese artist. The design brought an exotic depth of field to the space. Then in the ensuite, a Crinoid sea-lily fossil plaque from the Lower Jurassic Period in the shower enclosure and a bespoke mosaic floor panel with fish motif add decoration that reflects and celebrates the riverside location. 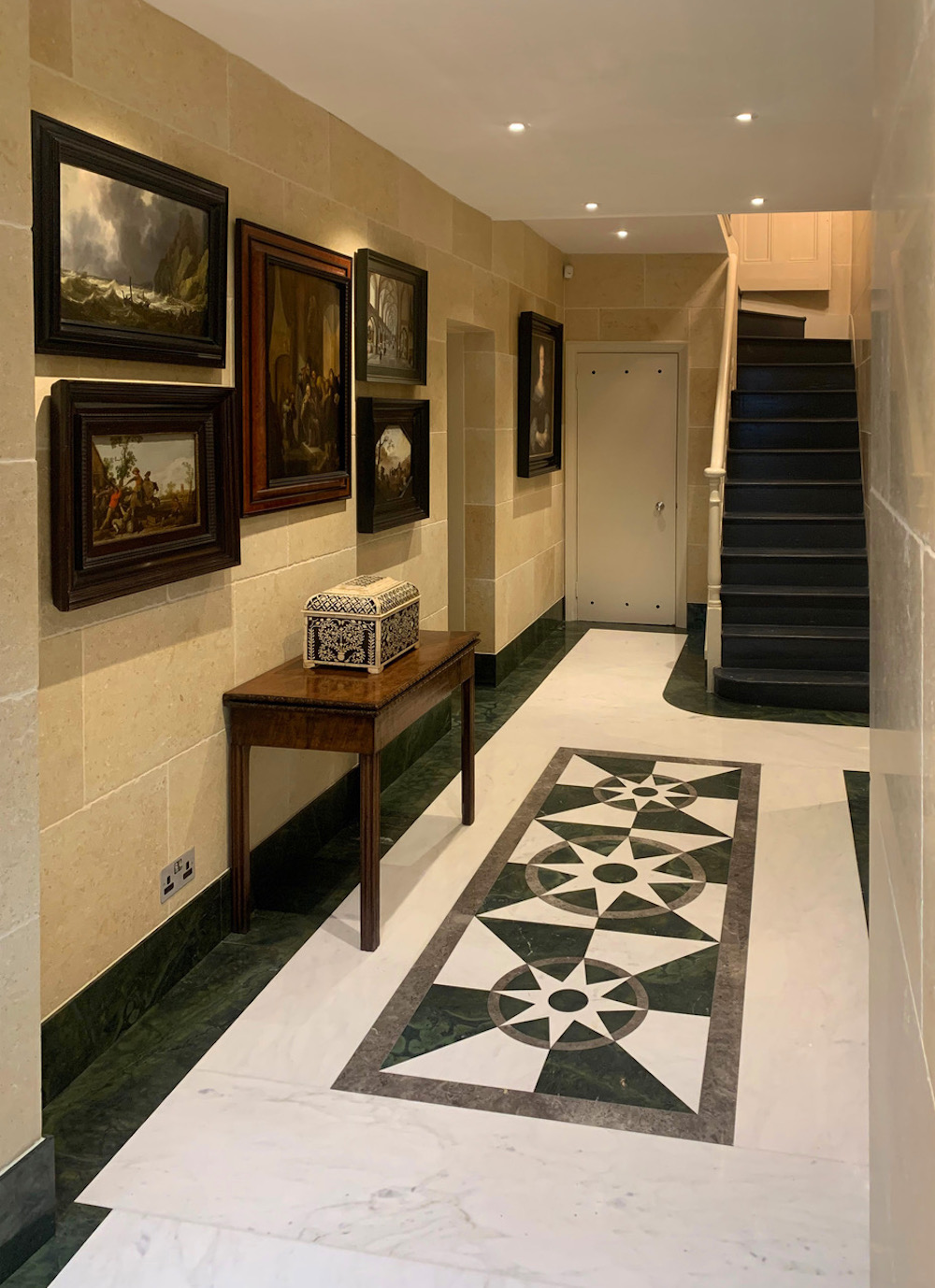 Image caption: A recent project, the basement of a house. The driver for this project was the client’s artwork, which can be seen on the walls. 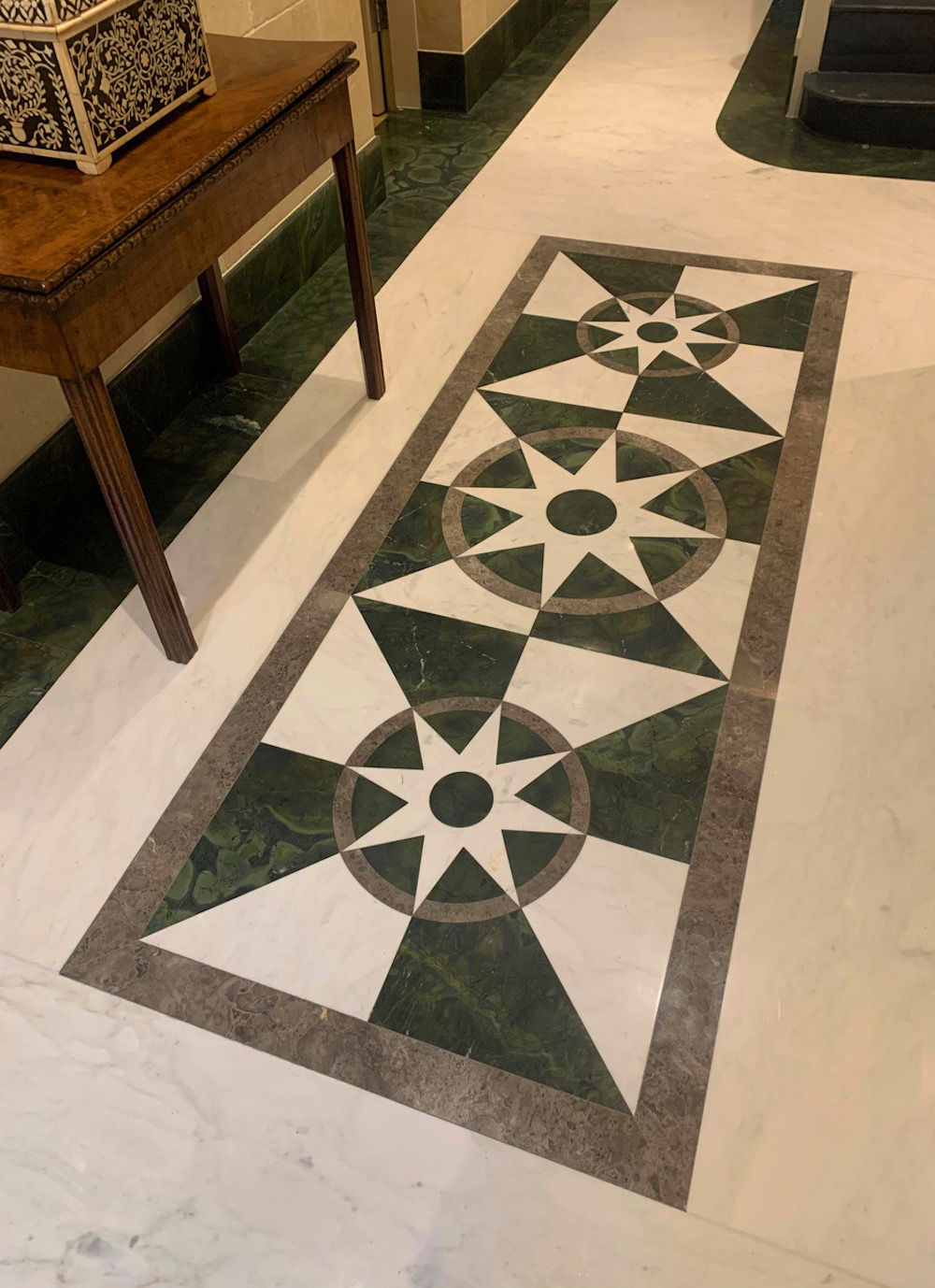 Image caption: The polished marble and quartzite floor is finished and polished, and incorporates a water-jet cut central panel design with a relatively traditional orientation, with a nod to mapping imagery as point of reference.

HK: And any favourites among those projects?

SE: In the study library of that same project, we commissioned a 5 x 2m stone relief that forms a backdrop to the external lightwell. It depicts the battle between Rama and Ravana, from the Ramanyana and was hand-crafted by a Cambodian carver. My favourite aspect of the project is the sheer beauty of the carving as a backdrop to the interior space. Every time I revisit the property, I’m struck by the fact that I have to stop and take it in for a moment. It makes me appreciate all the individuals who were involved and the relationships that developed within the process. I love the fact that the end result is unique and somewhat unexpected in the environment. Though if you ask me again tomorrow, I may have a different answer – my current project is always my favourite!

HK: What added extra do you think art commissions bring to hotel and commercial spaces?

SE: Without doubt it adds both personality and charm to a space. In a small, boutique hotel, a commissioned piece is a great way to chime with the personality no doubt already on display. But it can also give the different hotels of a corporate brand an element of personality and individuality. After all, each piece is unique so can’t be replicated from one location to the next. In that way, a bespoke art commission can also really add a sense of place. 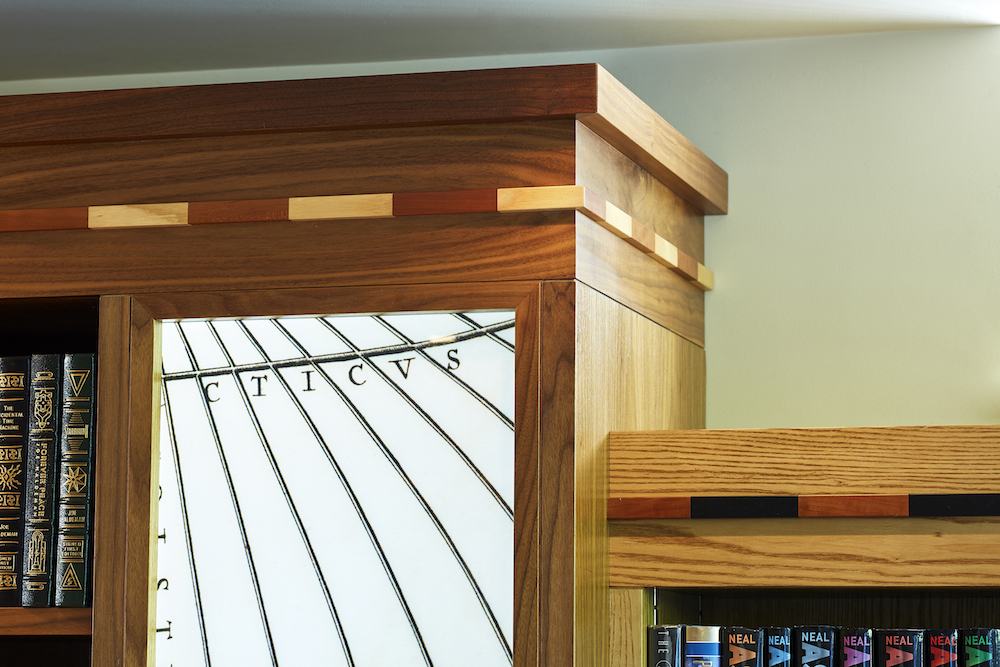 Image caption: The illuminated panels in a study library and borders on the bookcases are details from original plates by cosmographer and mathematician Andreas Cellarius.

HK: Are there any additional points to consider when creating artworks for commercial spaces that will inevitably have higher traffic than residential interiors?

SE: Yes, the work needs to have more impact visually to stand out in a public space. So, for example, stronger contrasts in the work mean a more impactful piece that will gain the attention it deserves. And, of course, in practical terms we need to choose materials that won’t wear or deteriorate with continual touch or use. Particularly as they’ll be subject to continual cleaning – they need to withstand whatever is thrown at them.

By contrast, in a residential setting, the owner will live with that piece for many years, so the subtleties and detail need to go deeper to be appreciated for longer. Also, the owner intrinsically knows the story the artwork is telling – in a commercial setting, the story needs to tell itself.

HK: What are you working on now – and what’s next?

SE: I’m currently working on a stunning bespoke Zellige mosaic from Morocco, orientated around a 48-point star design, widely considered the queen of traditional mosaic work. I particularly enjoy the geometry, and how the simple lines and coloured polygons knit together to make such a rich and complex visual tapestry. I’ve also recently been pursuing an interest in traditional Japanese Hakone marquetry, and looking at ways of applying this within more contemporary applications. I’m always looking to future, though, and I suppose the dream next project would be to create something that I had no idea was possible!