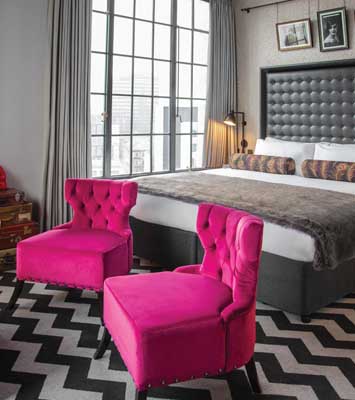 The use of colour in interiors has come back with a vengeance. Until recently there was an emphasis on ‘minimalism’ that was not really been minimalist, simply bleak. Minimalism was all about balancing empty against intense, purity of shape and form and a specific kind of aesthetic. In hotels it was reduced to cheap – less is less as it were. Now an era of colour and pattern is upon us, with the digitisation of the production of wallpapers and fabrics allowing full creative freedom for designers. There is a return of the idea that hotel interiors should create drama, and a sense of place.

Lighting is changing rapidly, partly because of concerns about energy consumption, but the introduction of LED lighting is becoming a game changer. It gives a freedom to the designer and a purity of light almost unknown before. As cost and rarity both disappear from the equation, the LED will become the dominant format and hotel energy bills will plummet. The ability to paint with light combined with digitally dyed carpets and digitally printed wallpapers and fabrics gives an unprecedented freedom to designers.

Like all freedom however, it comes with a set of rules. Colour and light can change the perception of space, and in an attempt to nail down ‘advancing’ or ‘recessive’ colour, and to see how lighting can change depth perception I knocked up a little ‘light modulator’.

The ‘modulator’ had movable partitions, into which I could project light, whether white or coloured, to see the effects it had on the perception of space. By photographing onto slides (which were scanned for this article) I was able to project the imagery and play with it, as I shall explain.