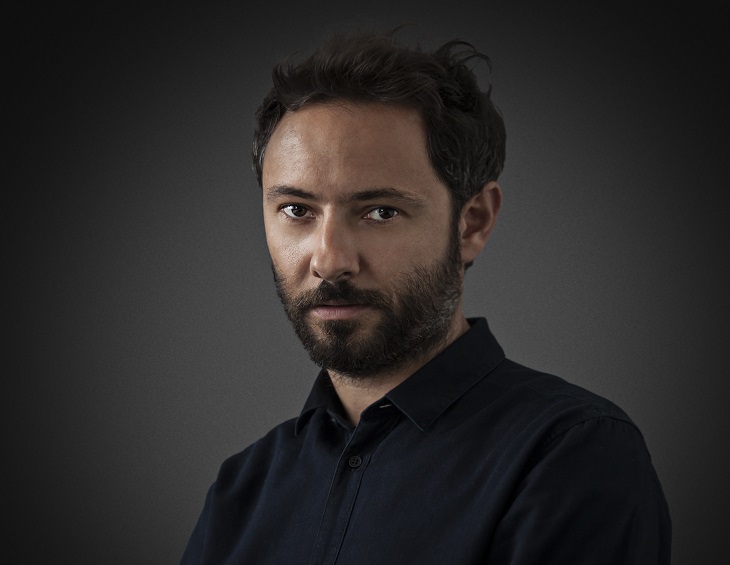 In Conversation With: Michele Salvi, Associate at Zaha Hadid Architects

Following the opening of the 770-key Morpheus Hotel in Macau, Zaha Hadid Architects’ Michele Salvi sits down with editor Hamish Kilburn to discuss pushing boundaries, ever-changing public areas and how the pioneering practice is continuing the legacy of a design legend…

When Morpheus first opened to the public in June of last year as the “world’s first free-form high-rise exoskeleton” hotel, to the surprise of nobody, it quickly became one of the most talked-about new-builds of the decade.

Six years in planning, the ambitious brief that the team at Zaha Hadid Architects (ZHA) received by Melco Resorts Entertainment was to design and build the fifth and final tower to complete City of Dreams Resort in Macau.

“Morpheus is a step into the unknown.” – Michele Salvi, Associate, Zaha Hadid Architects

To understand more about the challenges that were attached to such an enormous project – and to get a glimpse into the inner workings of one of the leaders behind many of the decisions – I join project architect and Associate Michele Salvi for one of his typical lunch hours in London’s bustling Clerkenwell district. “I love it here,” he says tucking into a fresh salad. “London’s vibrant culture scene makes Britain such a significant design hub.” 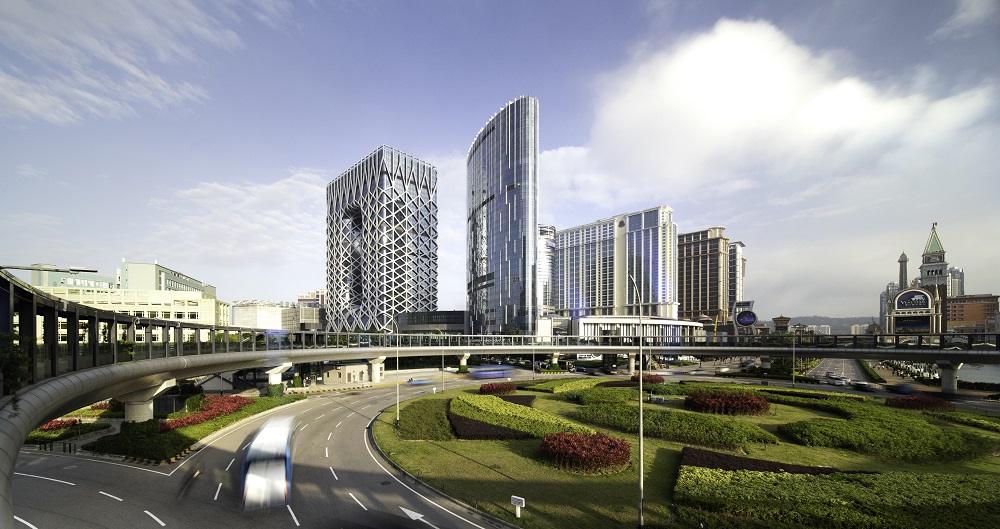 The architect, who operates from the ZHA’s London HQ and has recently been confirmed among other visionaries to be a jury member for the Outstanding Property Award London, is currently working on projects such as Mandarin Oriental Melbourne as well as several high-end competitions in Europe, Asia and Australia. And while these buildings that are on the boards are full-on commitments, there was nothing that could have prepared Salvi and the ZHA team for the opening of Morpheus. “Throughout the year there were many launch events with the hotel’s grand opening being the most important and expectations were high,” he admits. “The large atrium had been unwrapped from its scaffolding only a few days before and we had been working full speed with the interior contractors to deliver a project of premium quality right up until the last day. To be honest, it was a huge team effort.”

Instead of referencing architectural styles from around the globe, like the majority of other buildings in and around Macau, Morpheus ascended from its own unique environment juxtaposing its neighbouring buildings. “As our client says, Morpheus is a step into the unknown,” adds Salvi, “an unprecedented mix of challenges. More so than previous projects as parametric design tools methodologies have been used extensively in all design stages until construction.”

Rewind six years, and it was the late Zaha Hadid herself who had originally signed off the plans for the project. “We started with the envelope and exoskeleton,” explains Salvi. “The massing was given by the brief, the limited footprint leftovers from the existing City of Dreams development and 160m height restrictions because of being in close proximity to the airport.”

To create a fitting first impression that allowed all guests to experience the full scale of the project, the design team decided to keep the public areas as open and exposed as possible. “It takes more than a comfortable room and premium facilities to make a hotel experience truly special,” Salvi explains. “We wanted people to physically experience the building, be amazed and discover something unexpected.” Examples of this can be found no further than the 12 panoramic lifts, which through the full-height atrium provides what can only be described as a breathtaking 45-second experience of defying gravity. 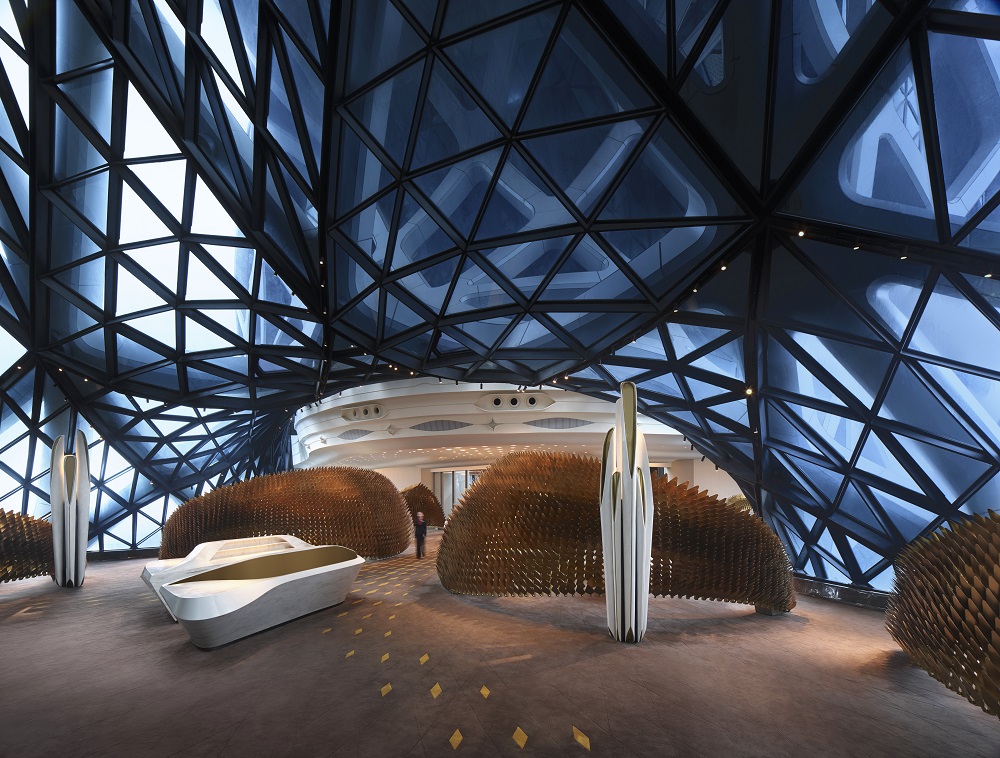 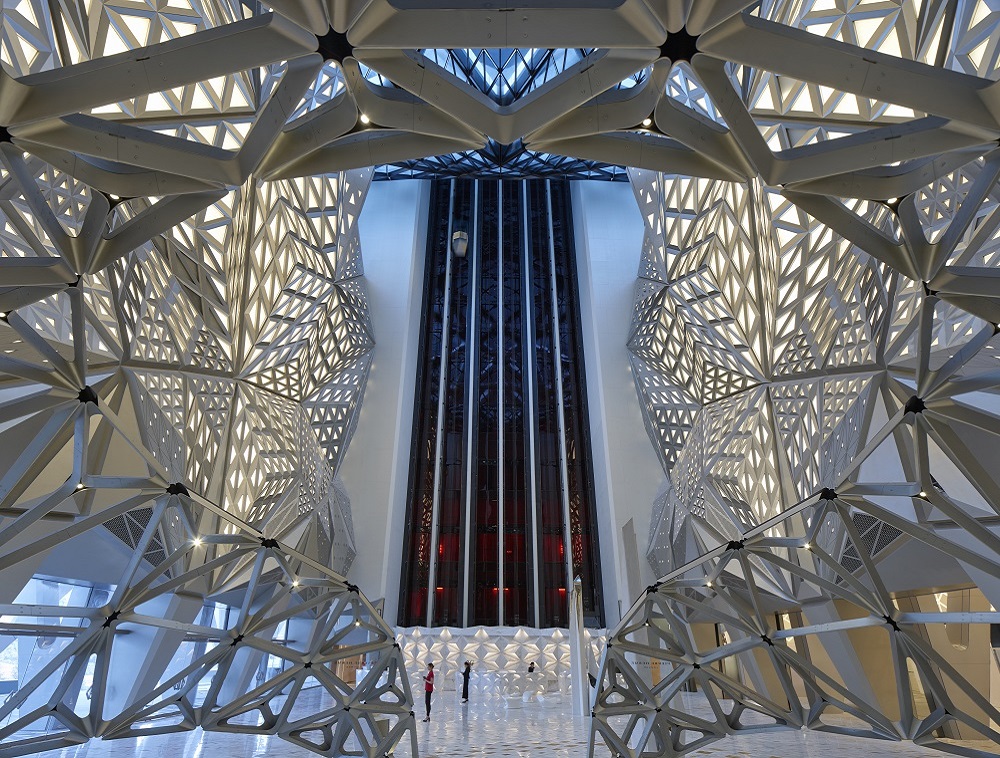 What gives the 40-storey Morpheus its iconic free-form exterior shape are a number of delicately created pockets within the architectural structure. “We carved out three voids from this solid block to increase the amount of unique corner rooms,” explains Salvi. “By bending and curving the façade towards the centre, we enhanced visual connectivity and created unexpected crossing views between different areas of the building, such as two panoramic bridges that host restaurants.” 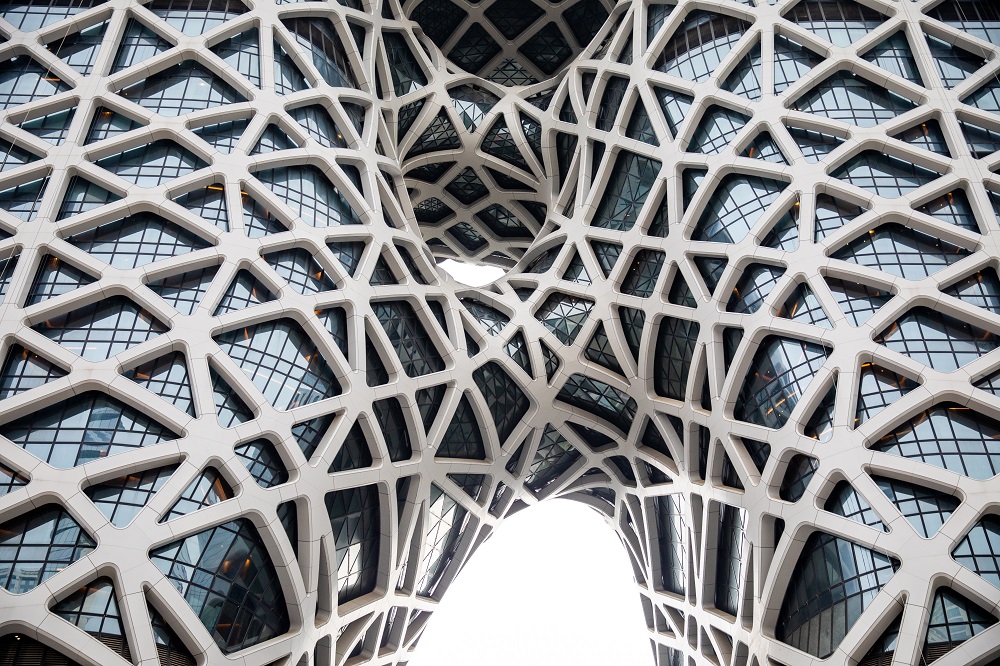 The guestrooms and suites within the hotel are somewhat hidden in the non-uniformed design in collaboration with interior design studio Remedios Studio. “Most rooms are within the flat façade and corners, with unique suites in the transition between flat façade and the voids,” Salvi continues. “All of them are behind the exoskeleton, and the variation of its pattern provides shelter from direct sunlight and generates dynamic filter towards the city.”

Hamish Kilburn: How do you escape from the daily grind?
Michele Salvi: Sailing, when I can, and I love travelling

HK: Where’s next on your travel bucket list?
MS: Hong Kong and Jordan are on my list. I would love to visit Patagonia and La Tierra del Fuego

HK: Renders or sketches?
MS: Both of them in every stage of design

HK: If I were to give you unlimited budget to design a hotel, where would it be in the world?
MS: I would love to design a floating hotel, always in motion rather than anchored to a specific context

HK: In your career, so far, what has been the largest change that has affected the way in which you design hotels?
MS: For me, this was when I started to use parametric tools, which could manage more information and has a much higher level of complexity

HK: Who inspired you when you were training to be an architect?
MS: Primarily Zaha Hadid. But also Frank Gehry and later on, from other creative fields, Ernst Haeckel and D’Arcy W. Thompson.

Despite Morpheus being no-doubt an impressive piece of architecture, it is perhaps the fact that it was one of the last projects that the late Zaha Hadid herself worked on that makes it an important building – and a poignant moment – in the firm’s journey. “Zaha’s loss was devastating,” says Salvi. “However, there is a strong sense of community within the company and we all share the responsibility to continue her legacy.” Salvi joined the studio just more than 15 years ago, first starting in the firm’s Italian studio before moving to London to work within – and later lead – a larger team. “I do feel as if I have contributed to making the company successful,” he says. After more than three years, we are doing incredibly well and continue to deliver unique projects.” 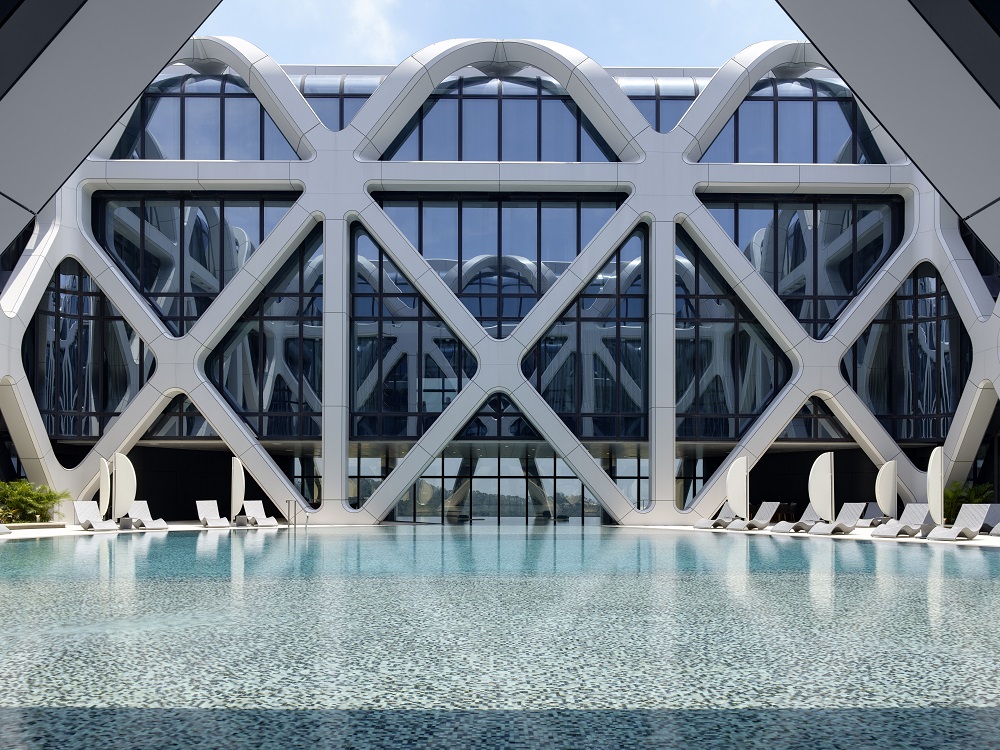 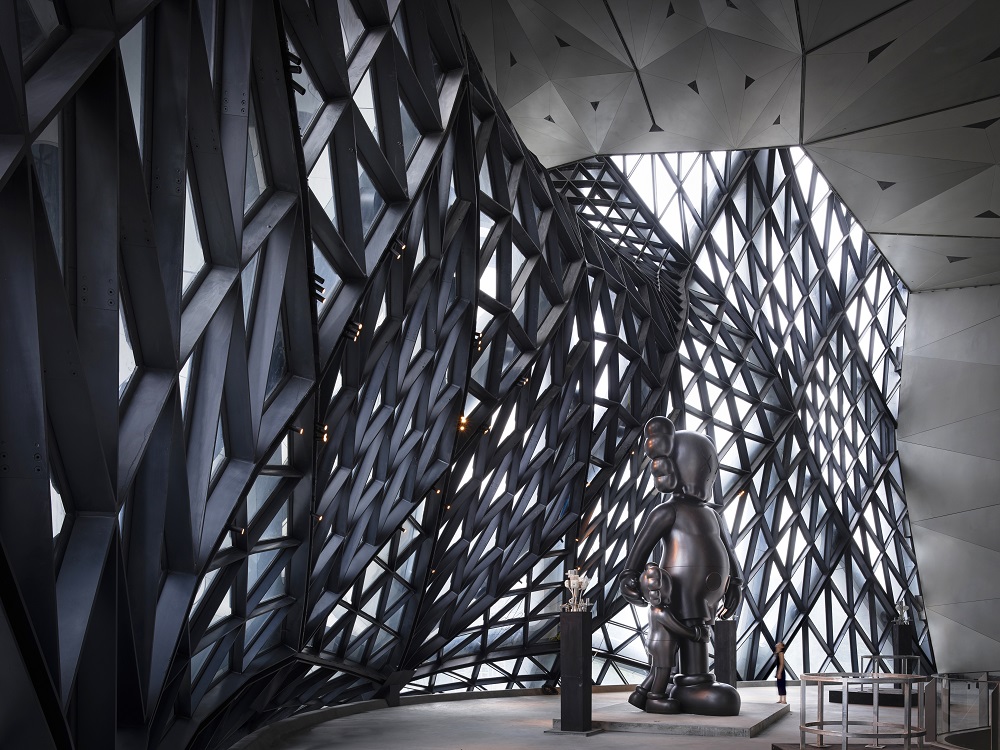 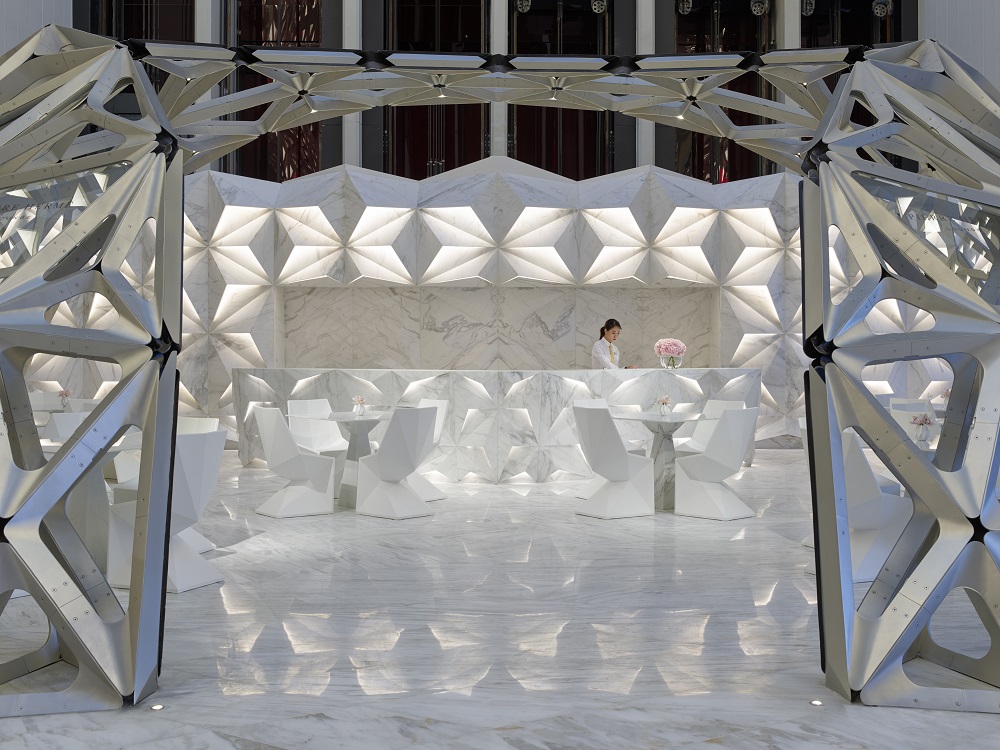 Just like the project itself did over many sketches and renders, Salvi has also evolved since early stages through to the completion. “Due to the extraordinary scale of the project, I feel I’ve learnt a lot,” he says. “From façade technology and interior design to form structure and workflow management, which is now a precious resource on every new project.”

With the architect’s lunch hour over running, and a design competition deadline looming, it’s time for Salvi to head back to the London studio to contribute further in changing the skylines of our cities for the better, all while continuing the work of the woman who changed architecture – and equality within the sector – forever. And with that, the extraordinary work taking shape behind the firm’s studio doors continues into a new chapter, which will no-doubt be complete with new, unique and elegant dimensions.