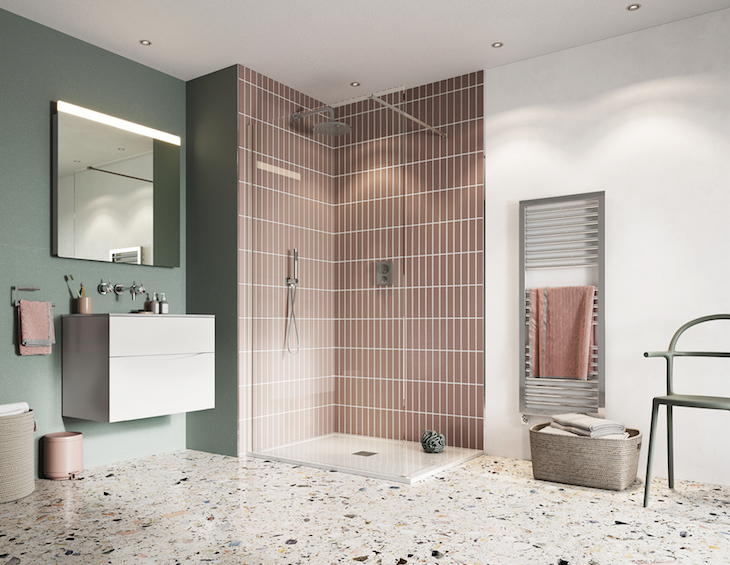 We’ve heard a lot of noise about the Crossbox Push shower unit in recent months, with its sharp design and innovative technology making it an ideal product to specify for the hospitality industry. But just how effective is it? We asked the experts at UK Bathrooms to put Crosswater’s new shower unit to the test…

While certain pieces of brassware in the bathroom are ever-evolving, others have remained fundamentally unchanged over the decades. While brassware as a whole has taken on the different colour finishes in vogue at various times – from gleaming gold brass to the matt black and white finishes trending today – some bathroom brassware seems to get more aesthetic attention than others. Notably, taps have undergone the most dramatic of developments, with handle shapes and spouts in a constant state of flux both design-wise – varying considerably from pieces based on historic precedent to those more akin to modern sculpture – to their positioning by the basin or bath, from classic mixer taps to wall mounted or freestanding.

Within the shower, shower heads have undergone bold changes over recent years, with forward thinking designs not only looking the part, offer different styles of water flow, or being integrated with lighting or elements of technology. More practical shower controls have been largely overlooked aesthetically, water and temperature typically regulated with the twisting of a valve and left at that. Until now. Cue the arrival of Crossbox Push by Crosswater, a module which radically modernises the design of shower controls and adds a revolutionary new functionality to the shower experience.

‘The Crossbox Push introduces a push control to the shower in a groundbreaking, design-focused way,” explains Graeme Borchard, Managing Director at ukBathrooms. ‘The instant water flow Crossbox Push offers at the touch of a button merges efficiency and precision control with an utterly sleek contemporary aesthetic, forever altering the look of within the shower.” 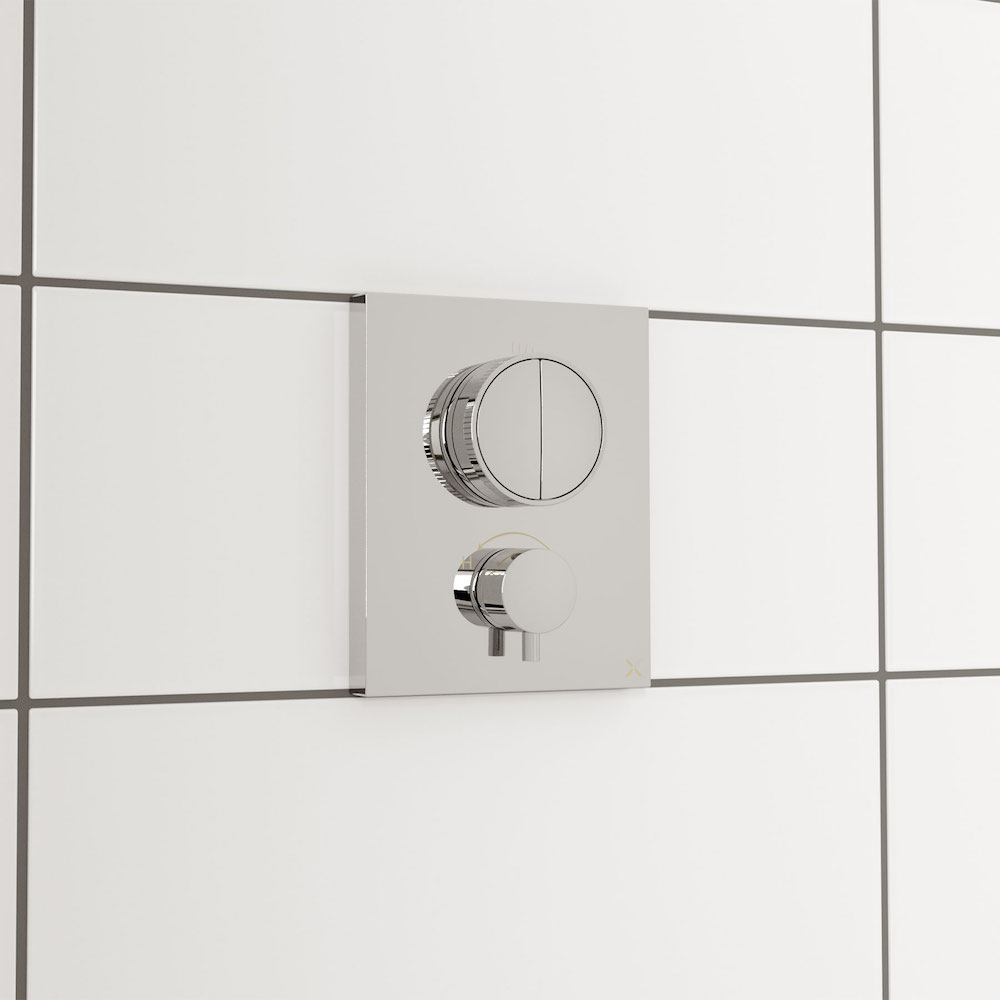 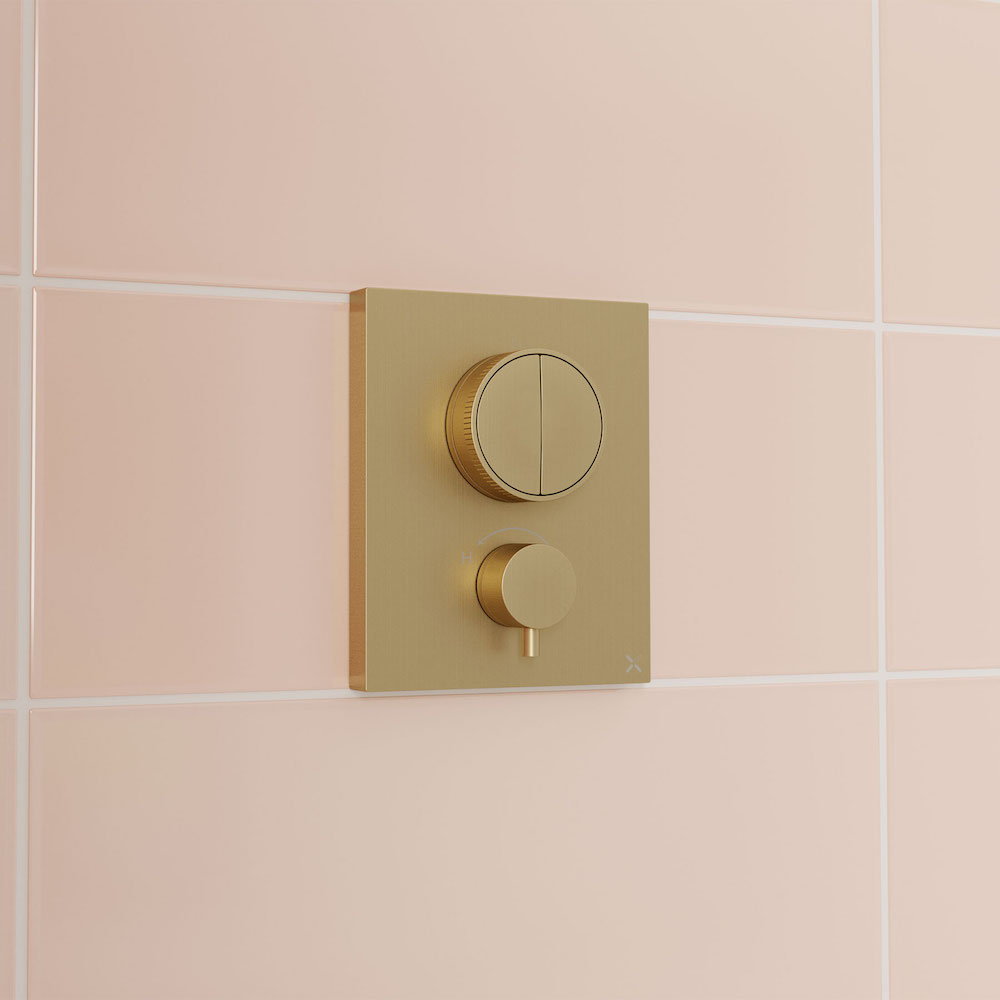 The push button operation of Crossbox Push brings a fresh perspective to shower control design. Why twist and adjust when you can simply press? Rotary heat control means that the desired temperature can be pre-set and conjured in a tap of the Neoperl ABS push button. Water can be summoned from up to three different water outlets – be it a rainfall, wall mounted or hand-held shower head – in one easy touch. 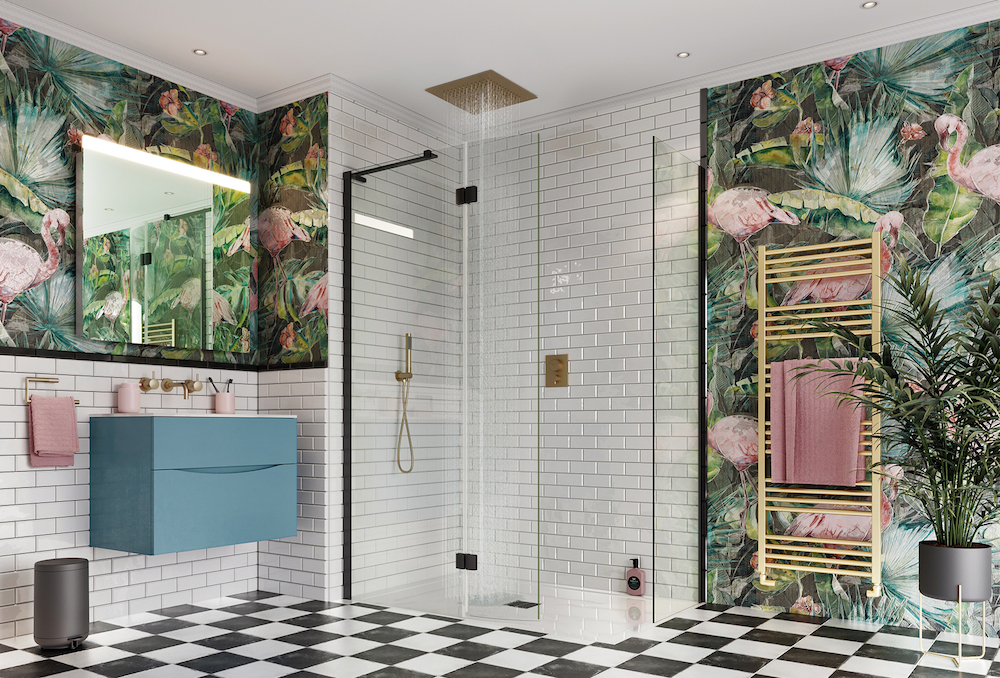 The two key elements of the Crossbox Push are the bold circular button, which is also integrated with a textured dial to alter water flow, and the smaller temperature control knob. Combined, the pair make a modern design statement, boldly protruding from the all metal backplate in a minimal, clean style, while the lines splitting the button into two or three add easy usability with low visual impact.

Available in an array of on-trend and timeless finishes, the Crossbox Push can be specified to suit any colour scheme, style or existing brassware – all bases are covered with the Crosswater MPRO palette. Got a Scandi-style pale space? Blend in with Matt White, or contrast with Matt Black. Feeling glamourous? Brushed Brass is your friend. Need some texture? Try the Brushed Stainless Steel Effect. Something classic? Chrome is here for you.

Style and substance in the touch of a button, the Crossbox Push is ushering in a new era to water control, and a total refresh of design within the shower space.

UK Bathrooms is one of the brands that has taken advantage of our Industry Support Package, while Crosswater is a Recommended Supplier. To keep up to date with supplier news, click here. And, if you are interested in also benefitting from this  three-month editorial package, please email Katy Phillips by clicking here. 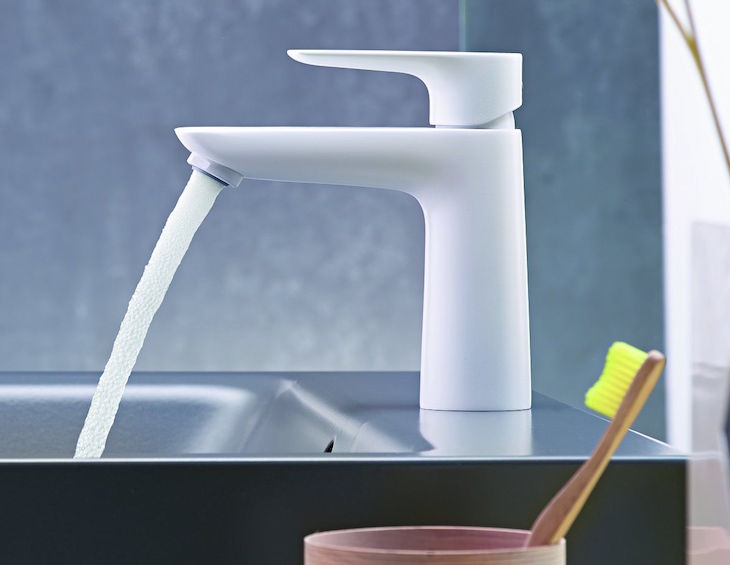 According to UK Bathrooms, taps in a range of metallics and subtle brushed finishes are trending in the bathroom for 2020 and beyond…

Taps with matt or brushed finishes are flooding into the most contemporary bathrooms in a varied palette of muted metallics and monochromes, transforming pieces of brassware into elegant design statements.

“A wide range of tap finishes are emerging as part of the trend for statement bathrooms.” – Graeme Borchard, Managing Director, UK Bathrooms.

Metallic finishes in gleaming hues ranging from copper to bronze have moved into the bathroom over the recent years, as brassware became more experimental – and #bathroomselfie started trending on Instagram. Now it’s the turn of subtler, more gentle shades, as brushed and matt finishes are launched across taps of every tone. “A wide range of tap finishes are emerging as part of the trend for statement bathrooms,” explains Graeme Borchard, MD at UK Bathrooms. “There’s a real desire for spaces which are bold and luxurious, but also unique and personal.”

Adding a tap – or other brassware – with a brushed, matt or textured finish to the bathroom instantly creates a sophisticated, tranquil feel, thanks to their delicate and understated nature. Due to the wide variety of shades which have recently become available, there’s now a tone to harmonise with every bathroom scheme. Brushed nickel, for example, is a mellow version of classic chrome, the soft silvery colour working beautifully with bathrooms in cool, watery hues that have blue, green, turquoise or white bases. For bathrooms decorated with warmer colours like pink, coral or yellow, muted brass and bronzes will blend in with the dusky, sunset feel of the space.

As well as their chic appearance, taps lacking the traditional high shine have practical benefits too, accumulating fewer watermarks and finger prints, and requiring minimal polishing, so are joyfully low maintenance.

Want to make more of a statement? Matt black and white taps have also taken hold of 2020, the striking shades packing more of a punch than brushed metallic tones, but with a minimal texture that doesn’t reflect light at all.

Matt monochromes work in any bathroom setting. A matt black tap absorbs light, forming a shadowy silhouette against the surface behind it – team it with matching brassware to create a pared-back take on the industrial, New York loft-style bathroom trend. Matt white taps speak of elegance and crispness, a point of difference against other glossy white ceramics in the room, while also working alongside them. Against surface materials like marble or tiles, white taps let the walls take centre stage, while black taps add a shapely focal point. 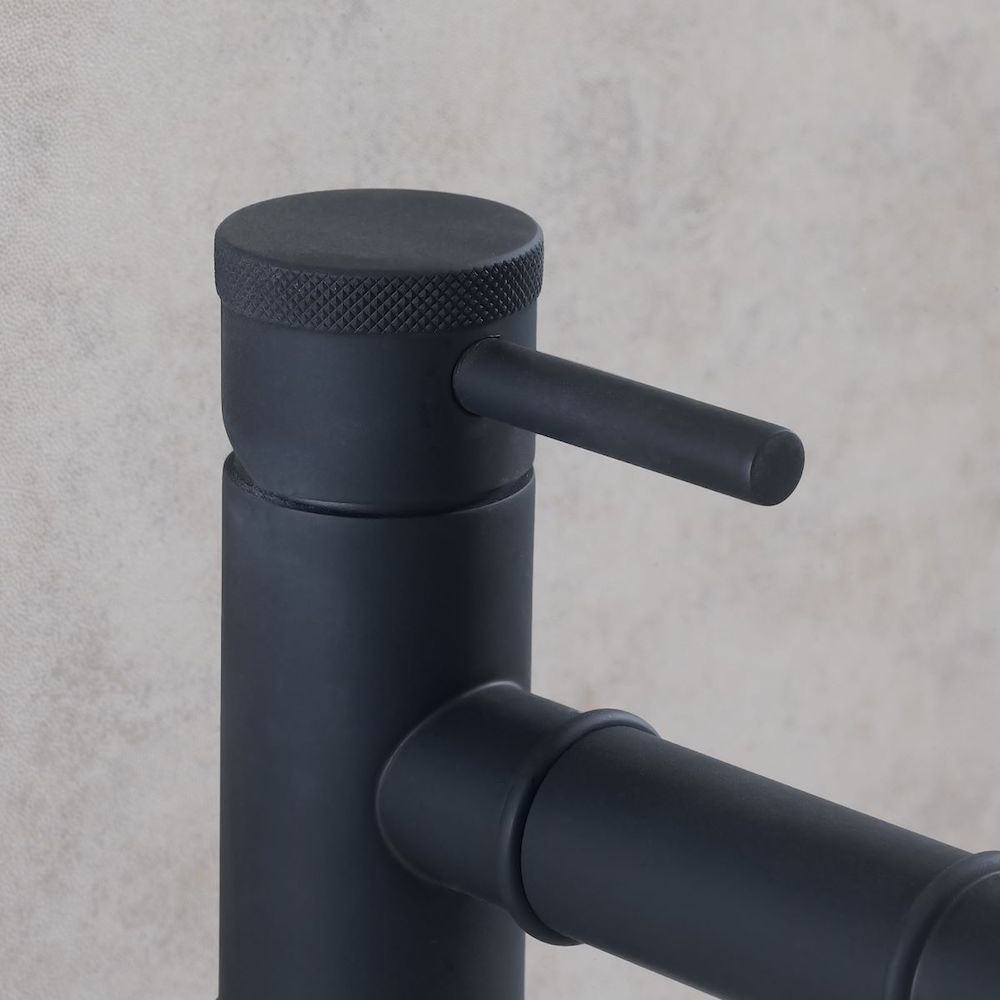 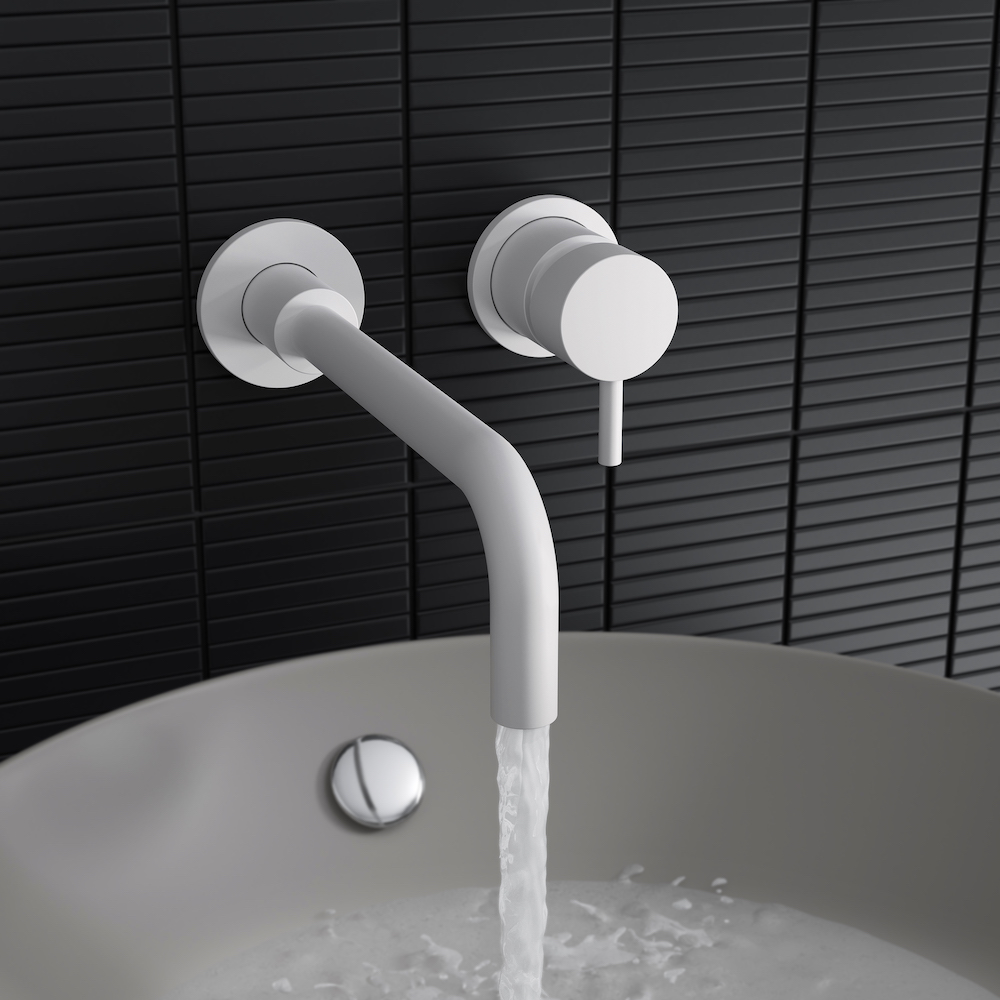 Matt textures work best on taps which have simple, modern shapes, so the material is emphasised and can be fully appreciated; a bevy of new releases from key bathroom brands combine brushed or matt finishes with clean, contemporary styling.

Taking influence from modern architecture, hansgrohe has added Matt White and Matt Black to its FinishPlus range, which also includes Brushed Bronze and Brushed Black Chrome, and can be applied across the sleek Metropol and Talis E ranges. Crosswater’s MPRO collection is also all about minimal shine finishes, its basin taps – as well as other coordinating showers, valves and accessories – can be coated in Matt Black, Matt White and Brushed Stainless Steel or Brass. Colour Your Bathroom by Abacus has the option to apply on trend Matt Black, Brushed Bronze and Brushed Nickel across its entire collection of taps and more, while VitrA’s angular Origin range carries Matt Black and Brushed Nickle on more than 150 products. 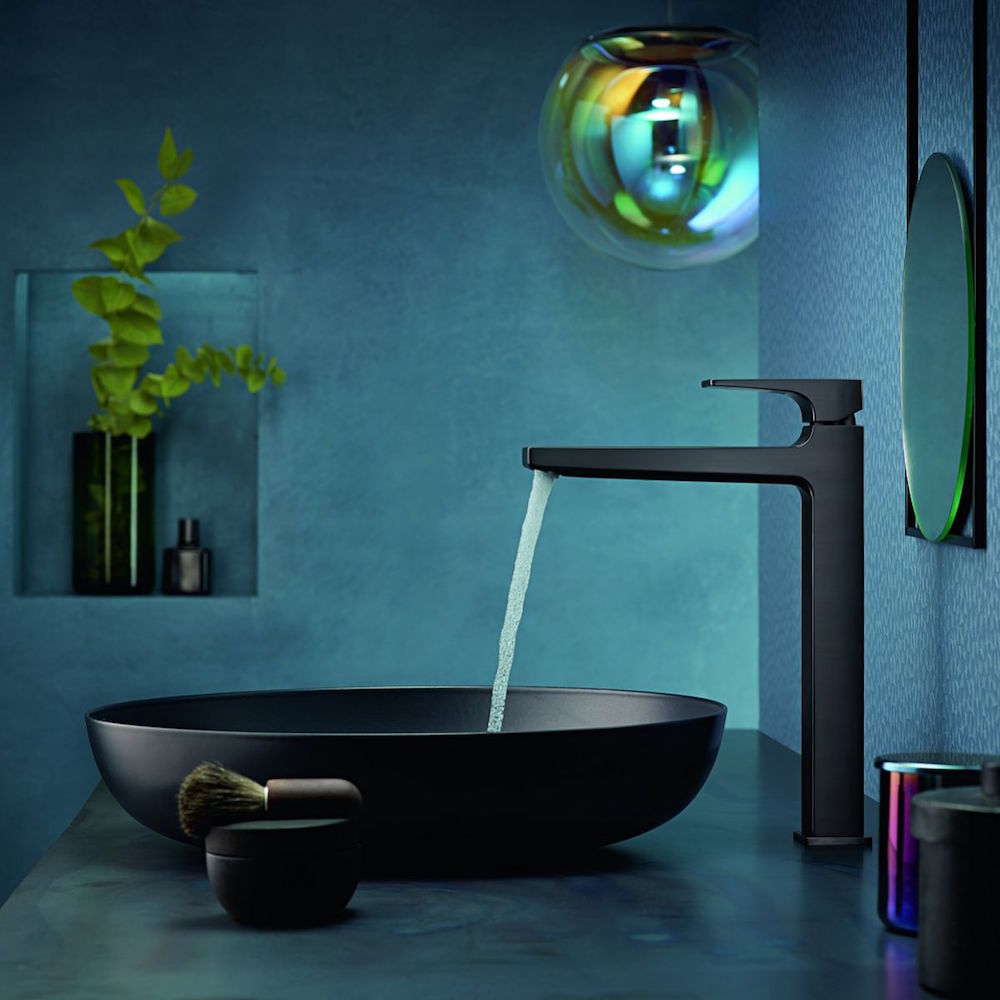 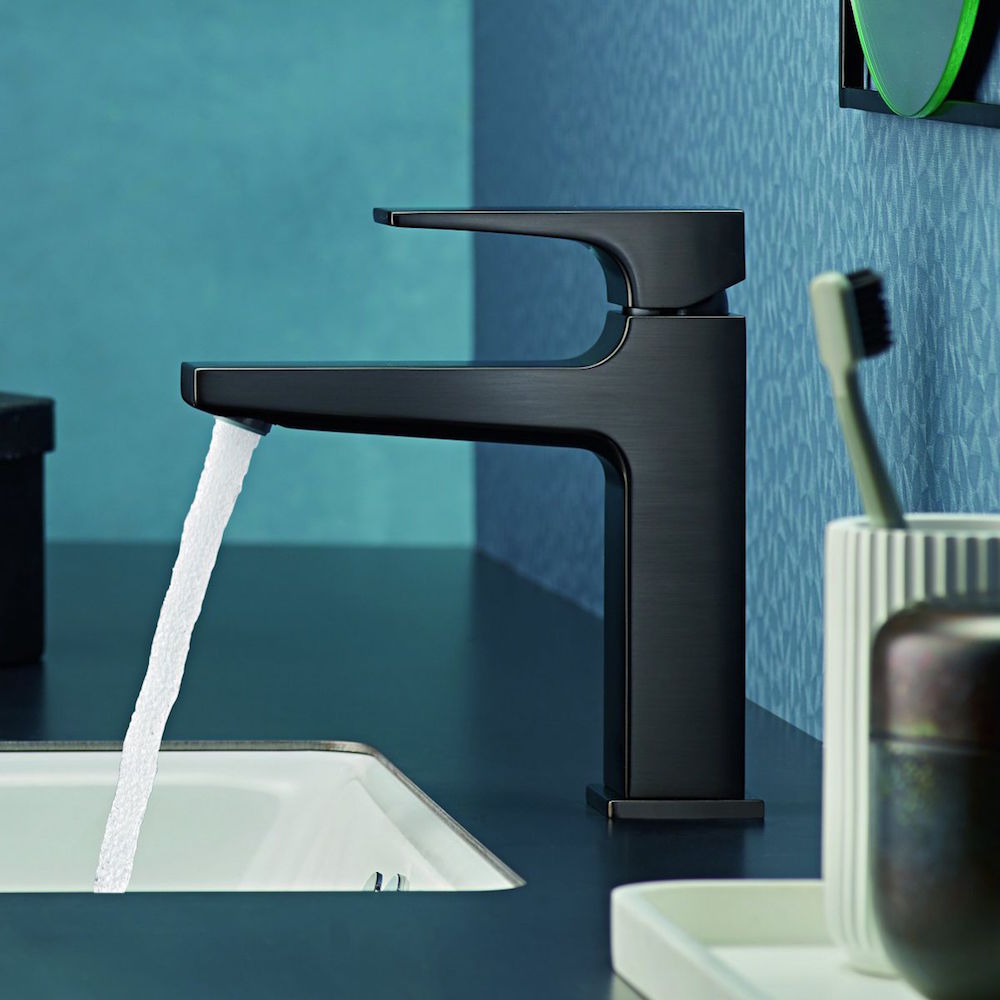 Finding a tap with a finish that will complement but not overpower your bathroom has never been easier – choose a single piece for a sculptural statement or use textured metal across the entire space to fully embrace this year’s hottest bathroom trend.