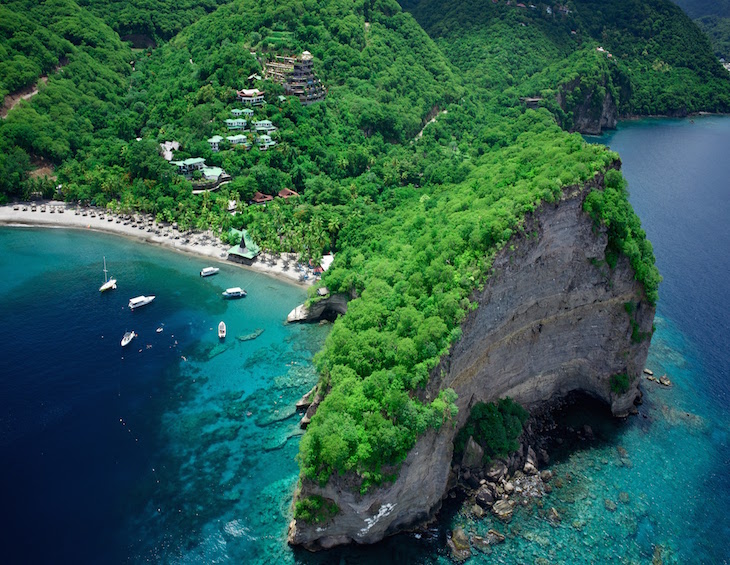 “I’m a man that looks for logic,” says the critically acclaimed architect Nick Troubetzkoy as he peers over the evening’s dinner menu to take in the sweeping views of the sun disappearing over the edge of the horizon. The last of the day’s light reflects off the luscious jade-green mountains, which are commonly referred to as The Pitons. Jade Club literally takes the concept of fine-dining to new heights, as it is perched majestically on the hotel’s top floor. It doesn’t matter where you sit, you somehow always manage to catch the postcard perfect perspective of the twin mountains. Nothing here has been designed by coincidence, which is refreshing. “Designing a hotel requires logical and thoughtful steps throughout the entire process,” Troubetzkoy smirks as he leaves a pause in the air for effect. “The game rugby on the hand is not a logical game – you pass the ball backwards for starters” And just like, as England prepares to execute its World Cup campaign, I catch my first glimpse of the legendary architect’s sense of humour, and his dislike for design without purpose. 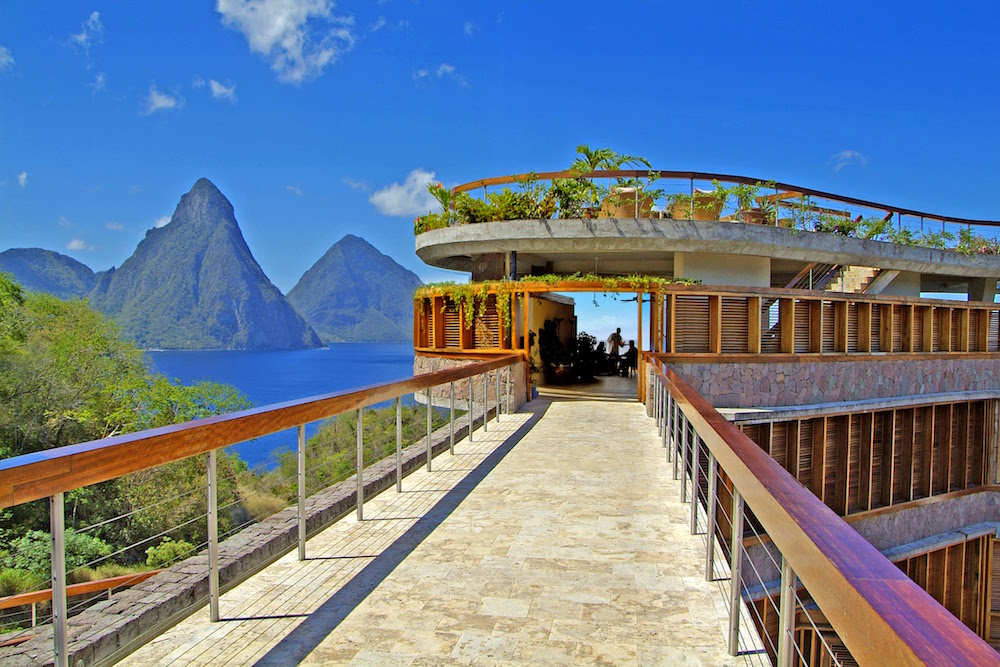 For guests checking in, the adventure of both Anse Chasanet and Jade Mountain starts shortly after the plane touches down on the island’s soil. For the Troubetzkoys, though, the adventure started in the ‘70s, when the couple visited the tropical destination and fell in love with the island’s pristine, Caribbean Sea-facing, west coast.

Drivers in Saint Lucia don’t lie. When warned that you’re going to endure a bumpy ride, that’s a cue to buckle up. The exact location of both hotels is the first indication that these magnificent properties have been designed meaningfully, from concept through to completion, in order shelter ultimate and unquestionable privacy and luxury. That kind of treasure comes at a cost, which in this case is an uneven road and a toe-curling drive over a cliff-edge. It’s the only road that has access to the hotels and it’s a thread that connects them from the heart of Soure Friee, a charming and friendly town, which is home to many of the staff – and prevents trespassers.

Anse Chastanet sits at the foot of the mountain and is, in part, hidden within the surrounding forest that covers a staggering 77 per cent of the island. The hotel’s open-air design in both the public and private areas invites nature in at every opportunity. This is where the Troubetzkoy’s quest began, to create and develop the luxury hotel experience. Purchased in the ‘70s, the 49-key hotel was the Troubetzkoy’s debut luxury resort. Their plans to redevelop the hotel was in order make room for a new level of premium accommodation in Saint Lucia, the Caribbean, and indeed the world. 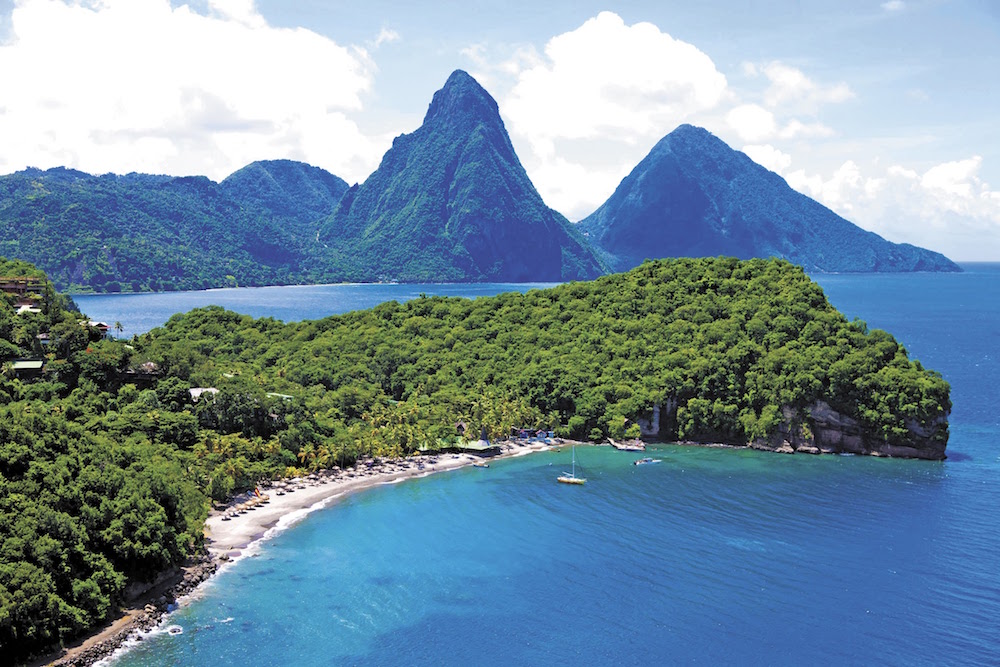 B.T. (Before Troubetzkoys), the Anse Chastanet was a collection of a few huts scattered along the beach, reflecting a conventional and arguably unmemorable Caribbean hotel. Years later, the Troubetzkoy family transformed it into a thriving multi-award-winning resort that operates as one of the Caribbean’s most premium destinations – and for good reason. “As far back as when we first opened, I remember asking our guests why we didn’t see very much of them outside their one-with-nature rooms,” says the architect. “I was told by them, that they were simply relaxing, breathing in the air, basking in the surroundings and enjoying a wonderful sense of calm and peace. When you compare that experience to being boxed into a traditional glass enclosed hotel room, breathing recirculated, machine-processed air, the difference is enormous.”

There is no doubt about it, the resort is of its time, but that’s also its charm; a space that feels lived-in with a warming home-from-home character that is amplified further by the caring and considerate staff. A home that has no boundaries between interiors and exterior, designed to reflect the topography of the land. A home that celebrates literally the very definition of nature in design. Anse Chastanet is a wonderful, colourful, playful and unpretentiously luxurious hotel – and it was here where the idea for Troubetzkoy’s next project, Jade Mountain, was born. 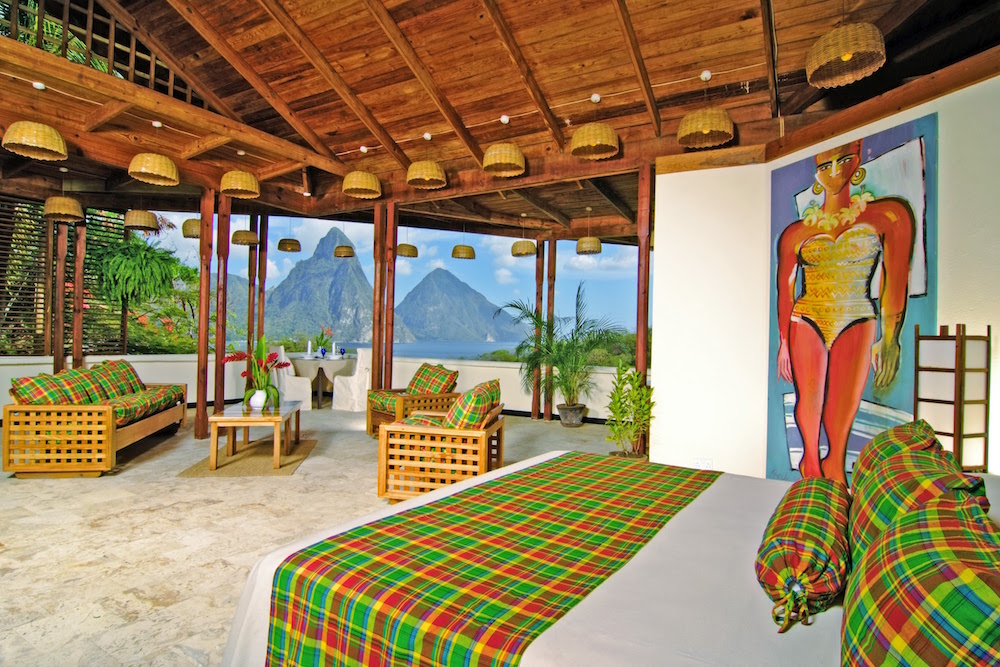 There are references of the same design ethos in the foundations of both Anse Chasanet and Jade Mountain. The Royal Palm, Anse Chasanet’s most premium suite, is an excellent example of this, and is located half way up the mountain where the two hotels almost meet. The open-air concept carves out an understated premium scene, very much opening up the space to allow for the 260-degree views to do the hard work, while the Caribbean-infused interiors frame nature and sense of place in all its majesty. Famous art pieces by both local and international artists add personality into the space. The walls in the are covered with vibrant paintings by postmodernist German painter, Elvira Bach. But what is most impressive, in my opinion, is how the structure of the suite, including the bathroom, has been carved out in such a way, with a logical eye, so that, just like Jade Club, guests can almost always see The Pitons from each and every corner, which adds scrutiny and challenges to the standard cookie-cutter approach when it comes to designing luxury suites.

“One day, while the plans for the hotel were still in early development, he looked at his collection, turned towards me and commented that ‘Jade Mountain’ had a nice ring to it.” – Karolin Troubetzkoy

“Do you know why we called it Jade Mountain?” asks Karolin Troubetzkoy who, as well as being the co-owner of the resort and is very much the brains behind its incredible initiatives, is also the current President of the Caribbean Hotel and Tourism. “Everyone always gets it wrong. They think it was simply the views of The Pitons. But actually, for years my husband created and collected these amazing miniature mountains, which were a luscious shade of jade. One day, while the plans for the hotel were still in early development, he looked at his collection, turned towards me and commented that ‘Jade Mountain’ had a nice ring to it.” 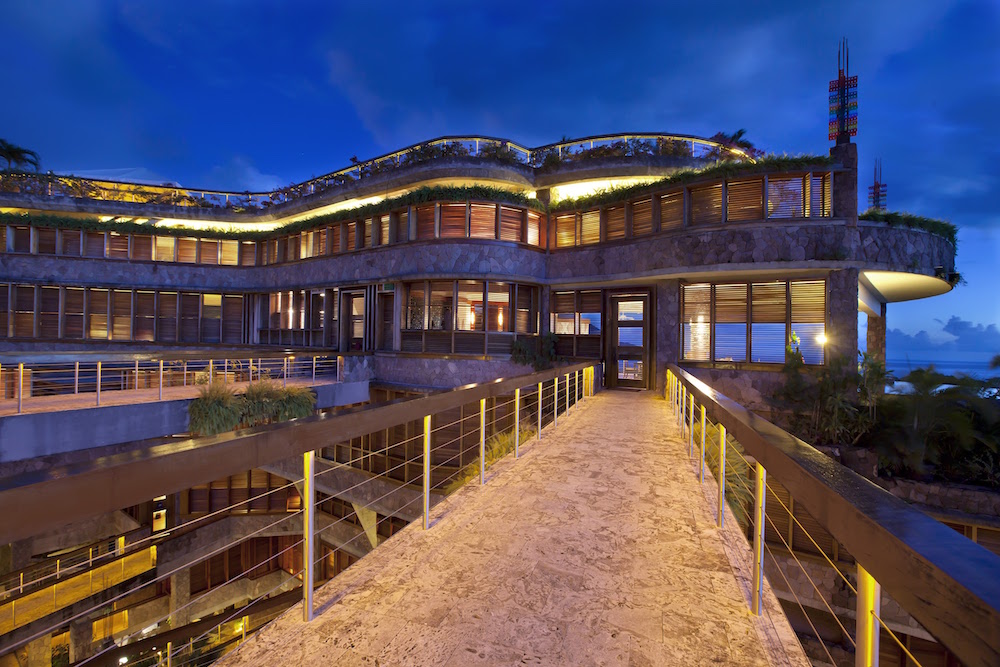 What makes the hotel unique to any other design story – or any other hotel around the world for that matter – is how decisions were made, and quickly changed. “I wanted to create individualised spatial environments that would enable guests to forget about the furniture or the fact that they’re in a hotel room,” explains Nick Troubetzkoy. “In essence, I want our guests to forget about everything but experiencing the psychology of the space on an emotional almost spiritual level.” 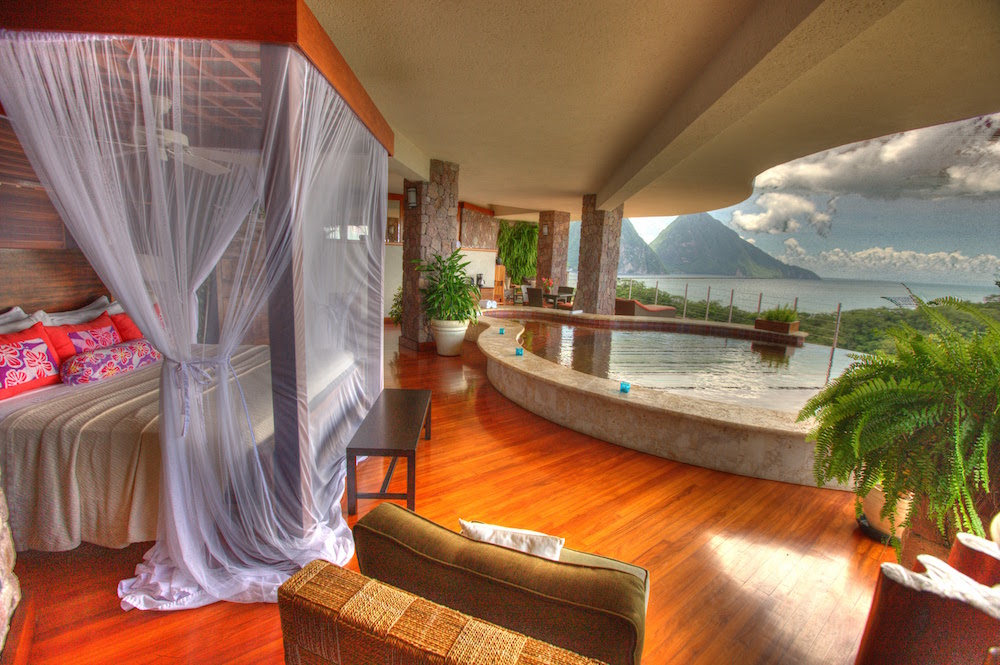 The term ‘jewel of the crown’ feels appropriate when describing its position on site. The magnificent structure of rough concrete imbued with locally quarried stoneappears once guests make it up the stairway to heaven by either foot or complimentary shuttle bus, and walk across the long, suspended private bridges that lead to what the hotel describes as ‘sanctuaries’. 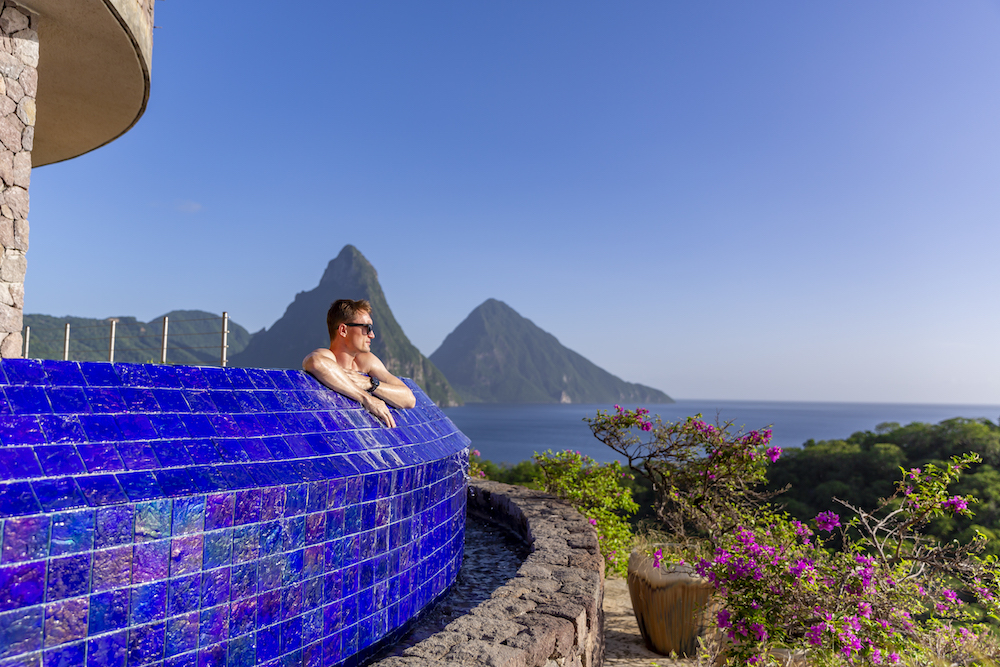 All 29 sanctuaries frame the unparalleled vistas of The Pitons. While each area has been individually designed, they all share a few common themes. The lack of right angles in the design, for example, removing the fourth wall and creating an open-air concept helps keep the relationship between guest and nature together, while the interior walls are finished in a crushed blush toned coral plaster quarried in Barbados. Because of these indoor and outdoor moments working in harmony, there is a natural rhythm to guests’ stay without the need for clocks or televisions. Almost all sanctuaries feature infinity pools – and, by far, the most impressive spaces are the Galaxy Sanctuaries. JD1, which became my luxe home-from-home (and my handstand hangout) felt like an oversized luxurious penhouse apartment. Following my move up the mountain from Anse Chasenet, it’s the first time during my trip where I recognised luxury manufacturers and suppliers, such as Duravit W/Cs and premium seating by Janus et Cie and Dedon. 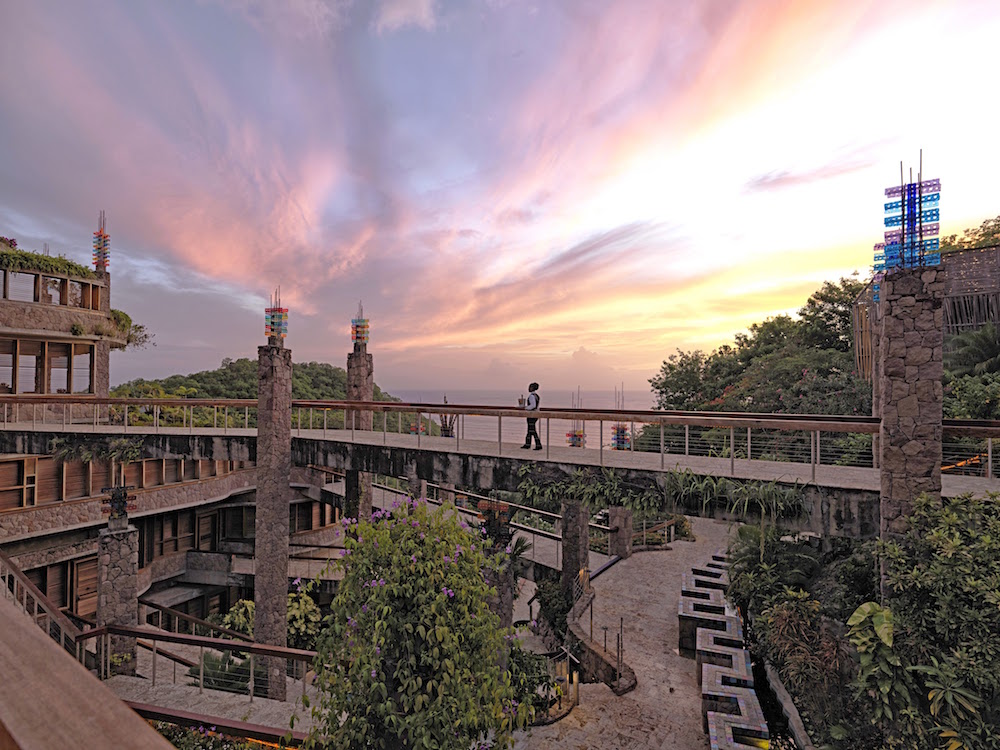 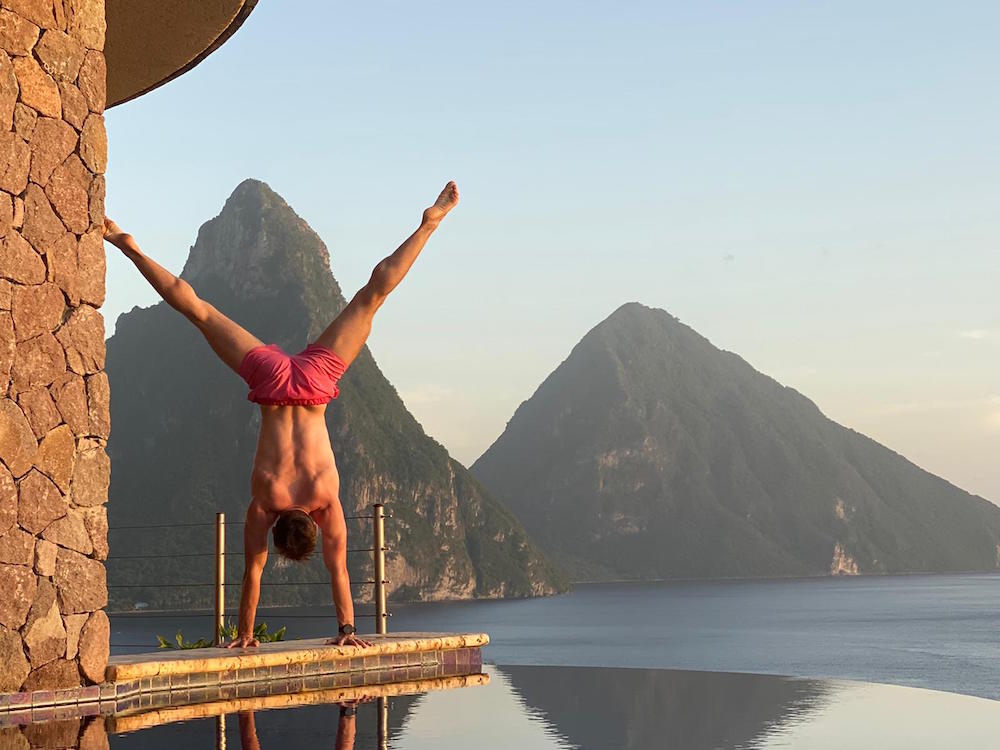 Editor Hamish Kilburn making the most of the instagrammable views

And that’s not all. At Jade Mountain, unlike many other luxury hotels that claim to be eco-friendly, sustainability is a core value and not greenwashed simply as a marketing tool. While Anse Chasanet shares the same ethos, the living areas of each sanctuary in Jade Mountain are finished with more than 20 different species of tropical hardwood flooring and trims harvested in an environmentally meaningful way. The resort’s technicians actually visited the Rain Forest of Guyana and personally chose which trees to be used. A multitude of hardwoods have been used including Purpleheart, Greenheart, Locust, Kabukali, Snakewood, Bloodwood, Etikburabali, Futukbali, Taurino, Mora and Cabbage Wood.

The consciousness of the resorts stretches beyond the design. 30 per cent of all produce at both Anse Chastanet and Jade Mountain is grown on site, just a few miles away from the hotels. It’s also here where the resort grows its own coco beans, so that both properties can make their own mouth-watering chocolate for guests to enjoy. 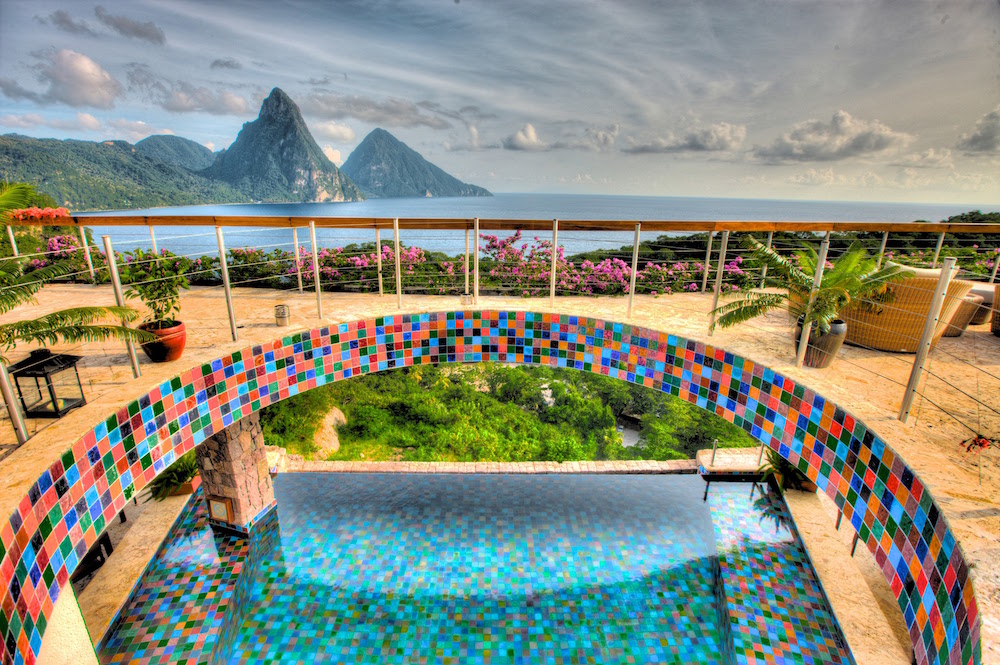 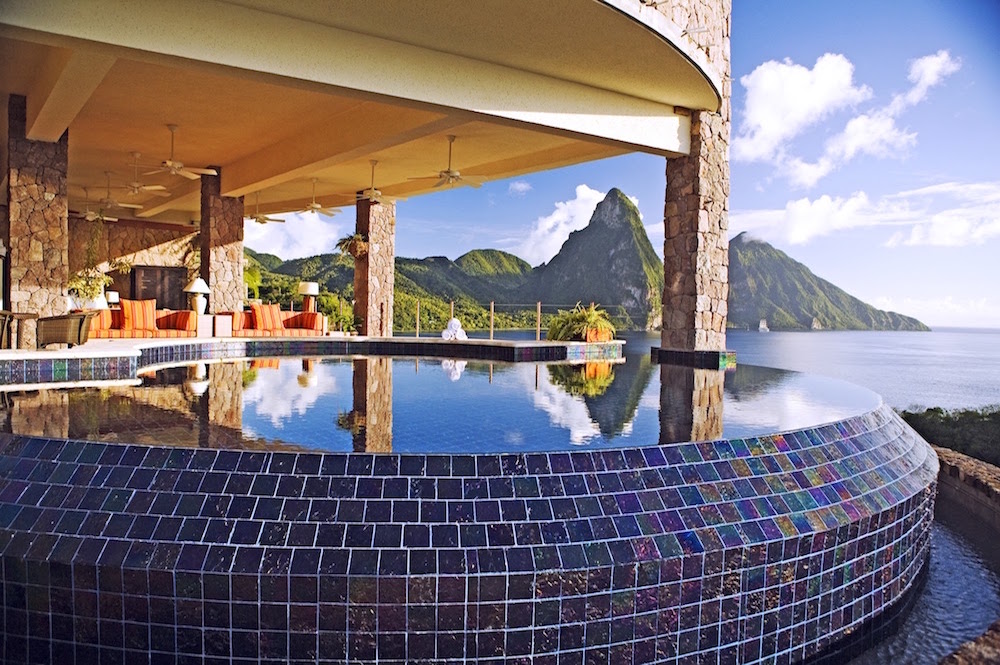 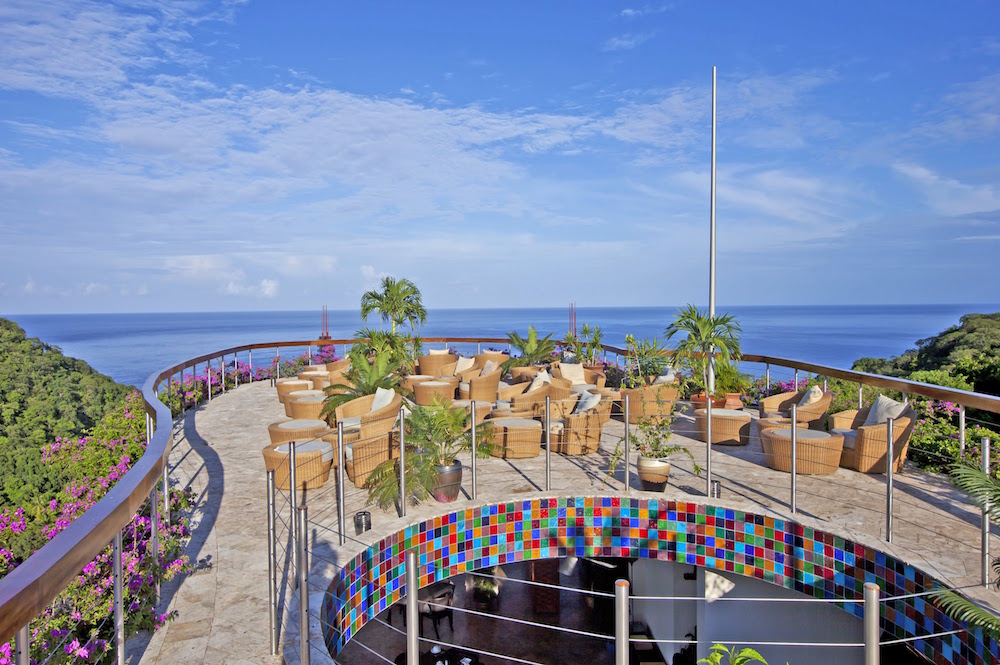 While hotel designers continue striving to cater to the heavy demands of the modern traveller, perhaps there is something to be said in stripping away unnecessary technology and opening up interiors to nature to ultimately allow the natural experience of a pocket of paradise to stand the test of time.. After all, luxury will never go out of style.