Hotel Designs was proud to be a media partner of Independent Hotel Show 2018, which proved to be a huge success ahead of the show’s arrival in Amsterdam next year…

Flawlessly bringing together the UK’s best independent hoteliers with premium and innovative suppliers, delivering insightful seminars and creating a myriad of opportunities to network, the seventh Independent Hotel Show, presented by James Hallam Insurance Brokers, has been heralded a great success.

“We were delighted to see the first-class and visionary quality of the show exceeding all expectations once again,” said Event Director Miranda Martin. “The UK’s most talented hoteliers, industry stalwarts, innovative entrepreneurs and influential media attended in droves, whilst an impressive number of exhibitors rebooked for next year (15 &16 October) on the spot. The feedback about the design features has been amazing and comments from visitors about their experience are evidence of yet another great show for the sector.”

Inspiring new features were found in every corner of the show at Olympia London on 16 and 17 October, including live installation ‘The Hotel Room of the Future’ created by Two’s Company Interiors.

Providing a glimpse into the near future, the Hotel Room of the Future buzzed with excitement and conversation over the two days. The room offered intuitive tech to enhance the guest experience, rather than to taint it with confusing switches and screens, the bed incorporated tech, scent and science for a night of deep sleep, while the futuristic design of the bathroom provided the essential instagrammable feature.

Many hoteliers headed for The Dyson Meeting Space designed by Galapagos to take part in facilitated speed networking sessions. Offering a ‘conversational menu’ as a prompt for peers to share views and experiences on various themes and topics such as ‘The Future is Female’, ‘Multiple Site Operators’ and ‘Future Leaders’, this new feature at the show was a success for encouraging interaction and making new contacts.

Conducive to further networking was The Lobby, designed by Capellini. Located at the heart of the show with a range of seating options and tables, warm lighting and vibrant green foliage, it provided a calm space for conversation. 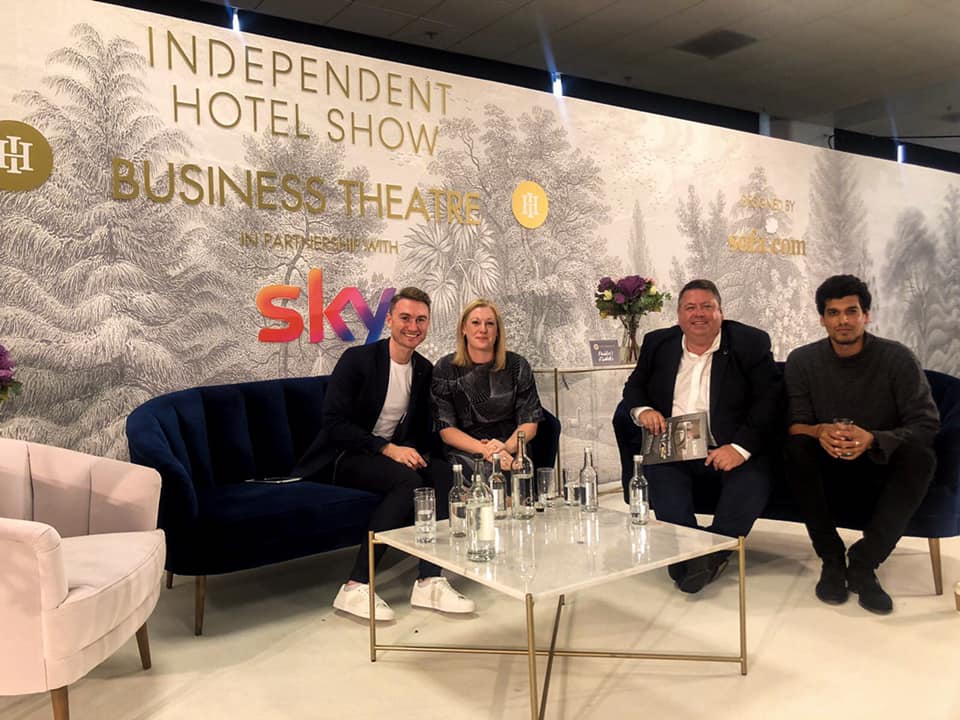 Recruitment was hot topic at the Business Theatre with HR consultant Claire Elston joined by Adam Rowledge of Georgian House, Sarah Powell of Soho Farmhouse and Babington House and Dee Smith of Springboard, who gave invaluable advice on how to inspire and engage the workforce.

On the Innovation Stage, ‘The Hotel Room of the Future’ was discussed by Gilly Craft, BIID President and Partner & Designer at Two’s Company Interior Design and Rodney Hoinkes, Chief Insight and Innovation Officer, Fresh Montgomery, who talked through the journey of the room, from research to reveal.

“The talks, panel discussion and power breakfast gave us lots to think about and actions to put in place back at our hotel” – Hoteliers Julia and Nick Davies, Owners of The Cottage in the Wood.

UK Hospitality’s CEO Kate Nicholls gave an overview of UK Hospitality and talked about strategies to address the industry’s labour shortage by making it an appealing place to work. Nicholls said work was underway to convince the Government that the sector is not a low-skilled one, but a semi and soft-skilled one and to promote the sector as an attractive and viable place to build a career.

Other events at the show included a rare chance to hear former Waterside Inn Maître D’ Diego Masciaga reveal what it was like to front the three Michelin-starred restaurant for 30 years. Diego shared his service tips in a keynote interview with Peter Hancock, Chief Executive of Pride of Britain Hotels.

Throughout the show, esteemed speakers, VIP hoteliers, show partners and their guests were invited to visit The Suite designed by Valdivian. Bold colours, striking patterns and beautiful furniture set the scene for networking, meetings or simply catching up.

Consistent with every year of the Independent Hotel Show, hoteliers, returning and new exhibitors alike were impressed with the high standards and calibre of opportunities and leads.

“We loved the Independent Hotel Show,” said hoteliers Julia and Nick Davies, Owners of The Cottage in the Wood. “The talks, panel discussion and power breakfast gave us lots to think about and actions to put in place back at our hotel. We met with key suppliers that we were looking for as well as new ones too. The Hotel Room of the Future was fascinating and gave us lots of ideas for our upcoming rooms refurbishment.

Barry Stuart, UK Sales Director Key Accounts, ADA International, whose company also fragranced the show, said: “The Independent Hotel Show 2018 has been one of the best exhibitions I’ve been to in a decade. Our stand was at its best and the footfall has been brilliant with the quality of attendees high.”

Thibault Gence, Co-Founder of tech provider Hotelhero: “This year was our first time exhibiting at the Independent Hotel Show and I have been impressed by the design of the Show and quality of stands. It’s more personal and on-point than other trade shows I’ve been to and is the best one for independent hotels – it’s not just about business, or branding, but about everything relevant to hoteliers.”

Nina Tarnowski, Director and Designer, Woodchip & Magnolia, the Show’s wallpaper partner, said: “Our business has only been going for 18 months, so being at the Show has been about brand recognition as well as connecting with hoteliers. Previously, we’ve only exhibited at design shows. The response we had to our mural in the foyer was amazing, so we’re thrilled to have been able to show our work in key places as well as have a stand.”