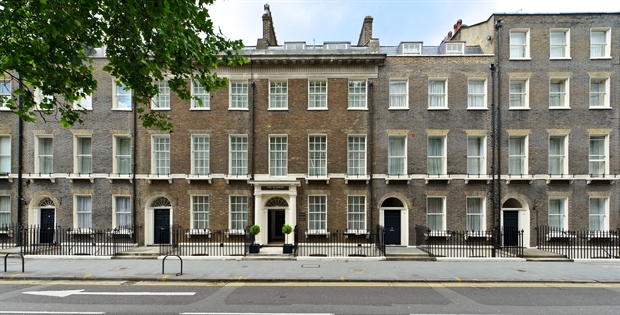 First look into the interiors of London’s The Academy

The 50-key hotel will open in the heart of London’s West End this summer. New York-based design firm Champalimaud Design explain how through the use of small details have made the interiors look and feel larger…

Following a full refurbishment by YTL Hotels, here are the first images that have been released of London’s soon-to-open Academy Hotel, Bloomsbury.

Situated in the heart of Bloomsbury in London’s West End, the boutique hotel is set to fully reopen this summer and will act as a base for both leisure and business travellers alike.

Renowned New York-based Champalimaud Design has overseen the comprehensive refurbishment, and has created an engaging blend of modern and antique throughout the 50 new guestrooms, Alchemy Bar, and cosy Library. Throughout the renovation, the design team, led by principle designer Alan Mainer have taken inspiration from the lives and loves of the Bloomsbury Set who lived and worked in the area in the early 20th Century. “The Bloomsbury group were a bridge from the Victorian era into modernity,” explains Mainer. “So too did our design want to feel electric in its choices – a mix of traditional English, art deco, and mid-century modernist forms, but forward-looking in its attitude.”

The lighting and furniture is made to look and feel particularly residential, including “things you would find in the home of one of our well-travelled guests,” said Mainer.

One of the challenges that the design team faced re-imagining the building’s interiors was the architecture of the hotel itself. “The UK is wonderfully protective its landmarked spaces and The Academy is composed of five 18th-century Georgian townhouses that are recognised as landmarks,” said Mainer. “There were many elements that we had to be mindful of when re-envisioning the design of the hotel including staircases, moldings, and other specific architectural details.”

Another challenge – “which was rather exciting,” admits Mainer,  was figuring out how to make the smaller guestrooms feel more luxurious.  Mainer explains: “We accomplished this by delivering a sense of expanded amenities for the guest: a great bar cart, beautifully detailed closet systems that were a small footprint but big on design detail and guest consideration, larger TV’s, completely new and modernized bathrooms. We also upgraded the rooms by adding stylish furnishings and luxe materials, such as authentic grasscloth wallcovering for a residential feel.”

Adding accents of colour and humour throughout the hotel, most of the brightly patterned wallpapers have lively motifs that inject charm to reflect their spaces – and “create real conversation starters,” explains Mainer. “We’ve also employed brightly coloured paints to help add vibrancy to areas that previously felt dark.”

All rooms feature a marble en-suite shower room and bespoke furniture. In addition to the elegant interior, and luxurious amenities.

Based on famous Gower Street, The Academy is set across five traditional townhouses, and includes a spacious conservatory and garden courtyard. The lower ground floor will house a breakfast bar Refectory, while cosy nooks and small spaces set the tone for convivial, intimate gatherings. Designed to become a new neighbourhood social hub for the young media and academic crowd, the public areas of the hotel have been made to be the beating heart of all individual houses.

Steeped in glamorous yet laid-back luxury, The Academy’s contemporary take on townhouse living – and its refined look and feel – is said to become the perfect spot for city breaks in the Capital.