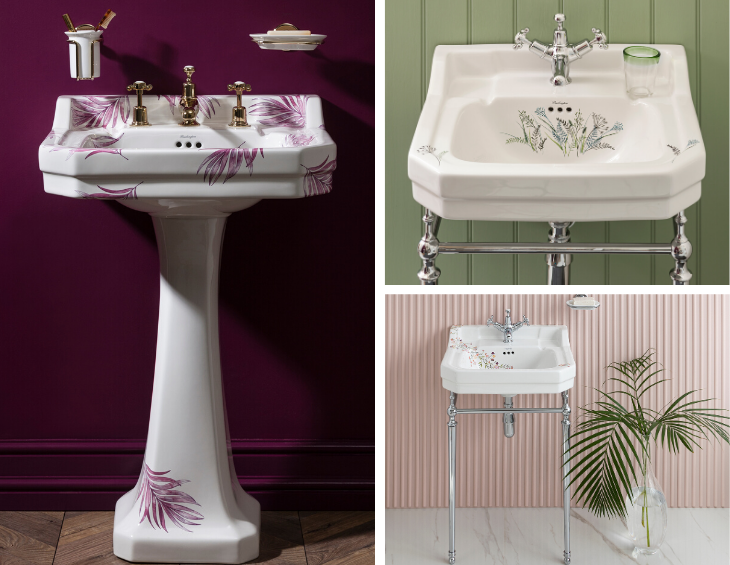 The new Bespoke by Burlington collection, which was designed in collaboration with Julie Ingham, marks a ‘new era’ for the leaders in traditional bathrooms…

With the launch of Bespoke by Burlington, Bathroom Brands Group Projects has just stretched the limits of possibilities when it comes to customisation in bathroom aesthetics.

Representing a new era of classic bathroom design, Bespoke by Burlington is a distinctive and unique collection of coloured and hand-decorated ceramics. Offering true customisation, the new products provide architects, specifiers and designers with an unsurpassed level of individuality, placing Burlington at the very forefront of modern-day bathroom design, whilst remaining true to its historic influences and style. 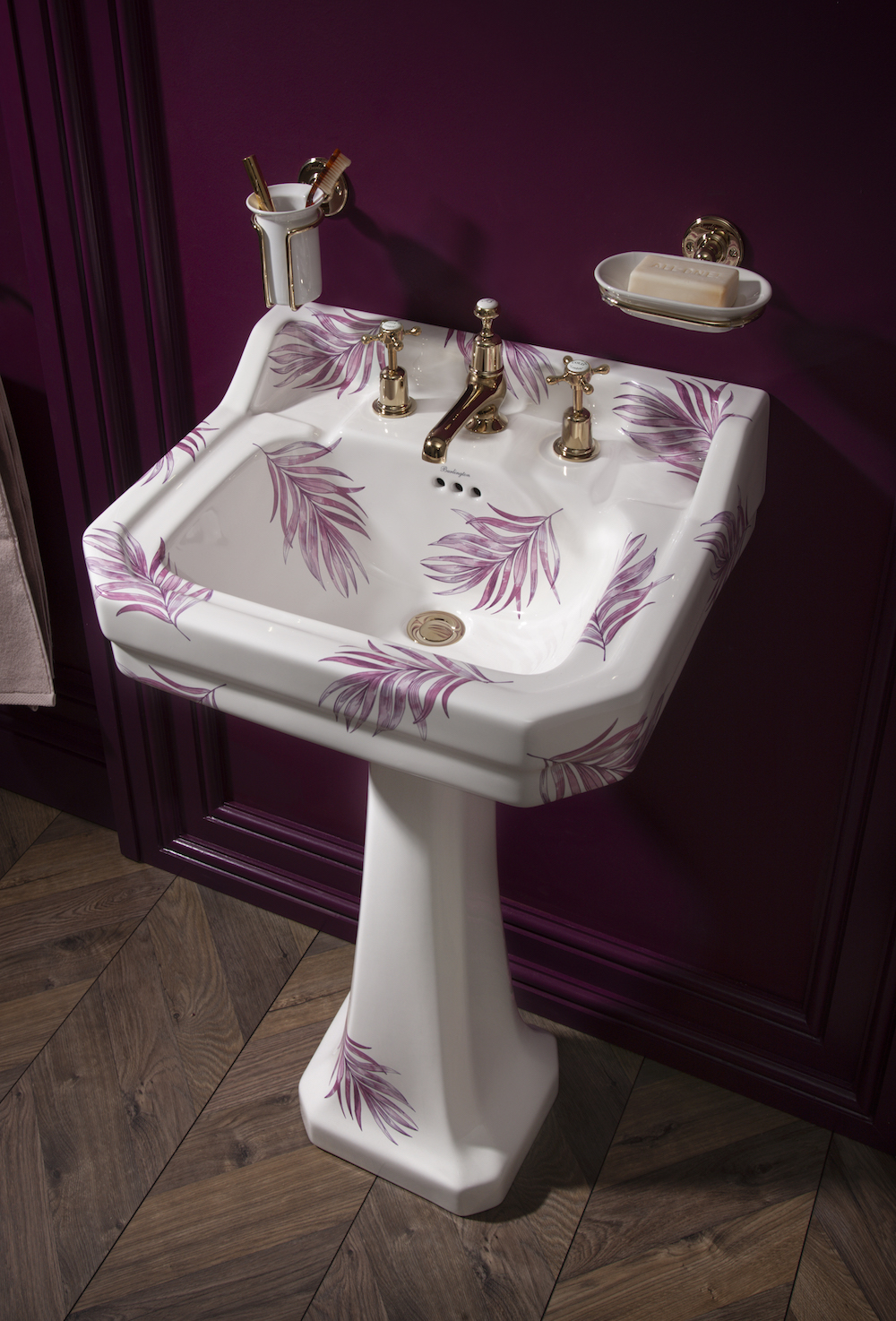 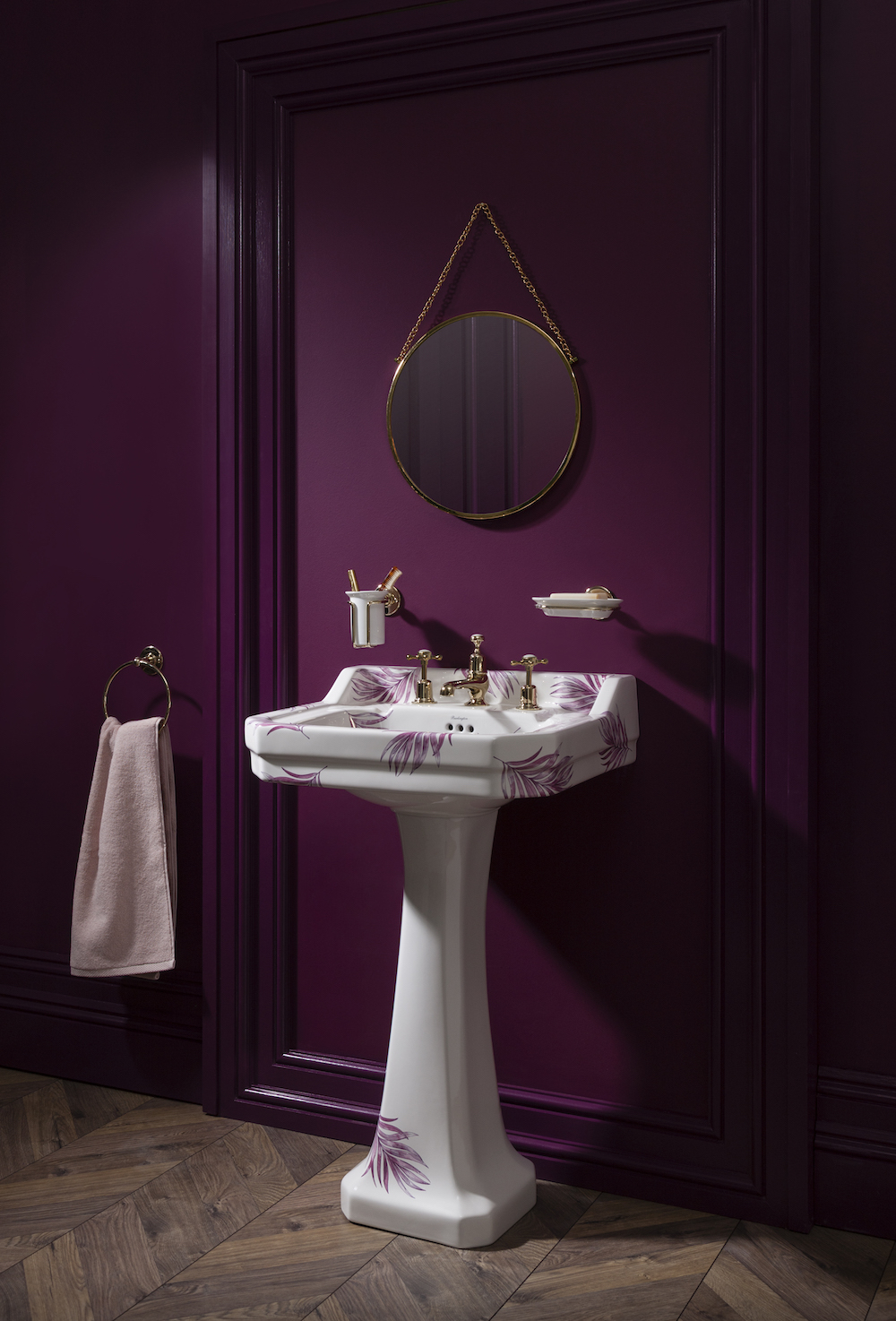 “The new Bespoke by Burlington collection marks a really exciting turning point for us as a Group,” explained Mick Bone, Director of Group Projects at Bathroom Brands. “Burlington’s products, in particular the Edwardian collection, have long been favourites of specifiers, designers and architects, especially within the hospitality market. Now, we can offer them even more choice when it comes to customisation, whilst maintaining the enduring quality and sought after authentic traditional style that Burlington has become known for.” Image caption: Oriental Blossum from the Bespoke by Burlington collection

Drawing inspiration from the decorated and coloured ceramics of bygone eras, Burlington worked in collaboration with British designer Julie Ingham to create the Bespoke by Burlington collection. Made to order by skilled craft workers in Staffordshire, in England, using the finest materials, the collection is presented on a selection of Burlington’s best-selling Edwardian basins and WCs. 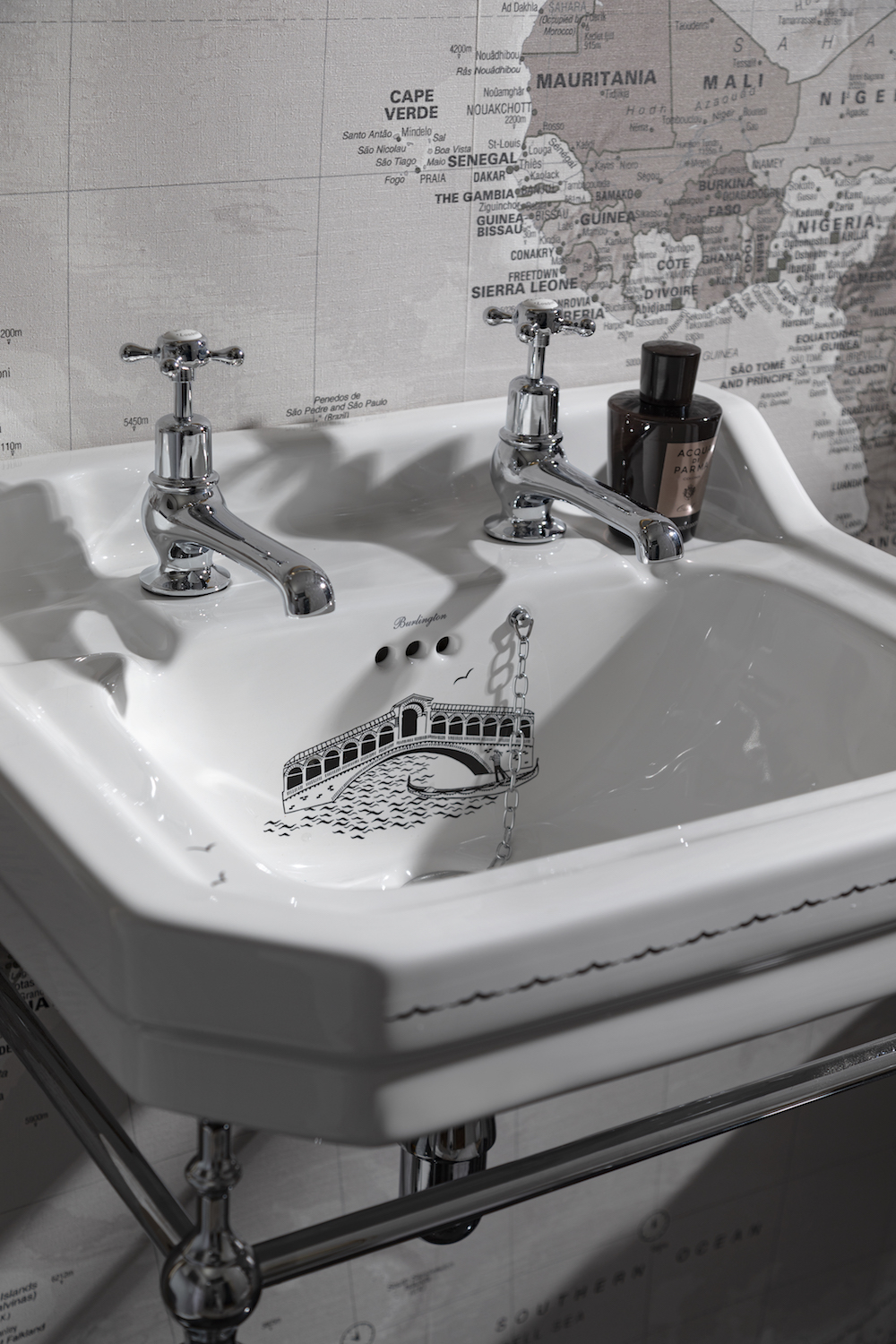 Image caption: Cityscape (Venice) from the Bespoke by Burlington collection 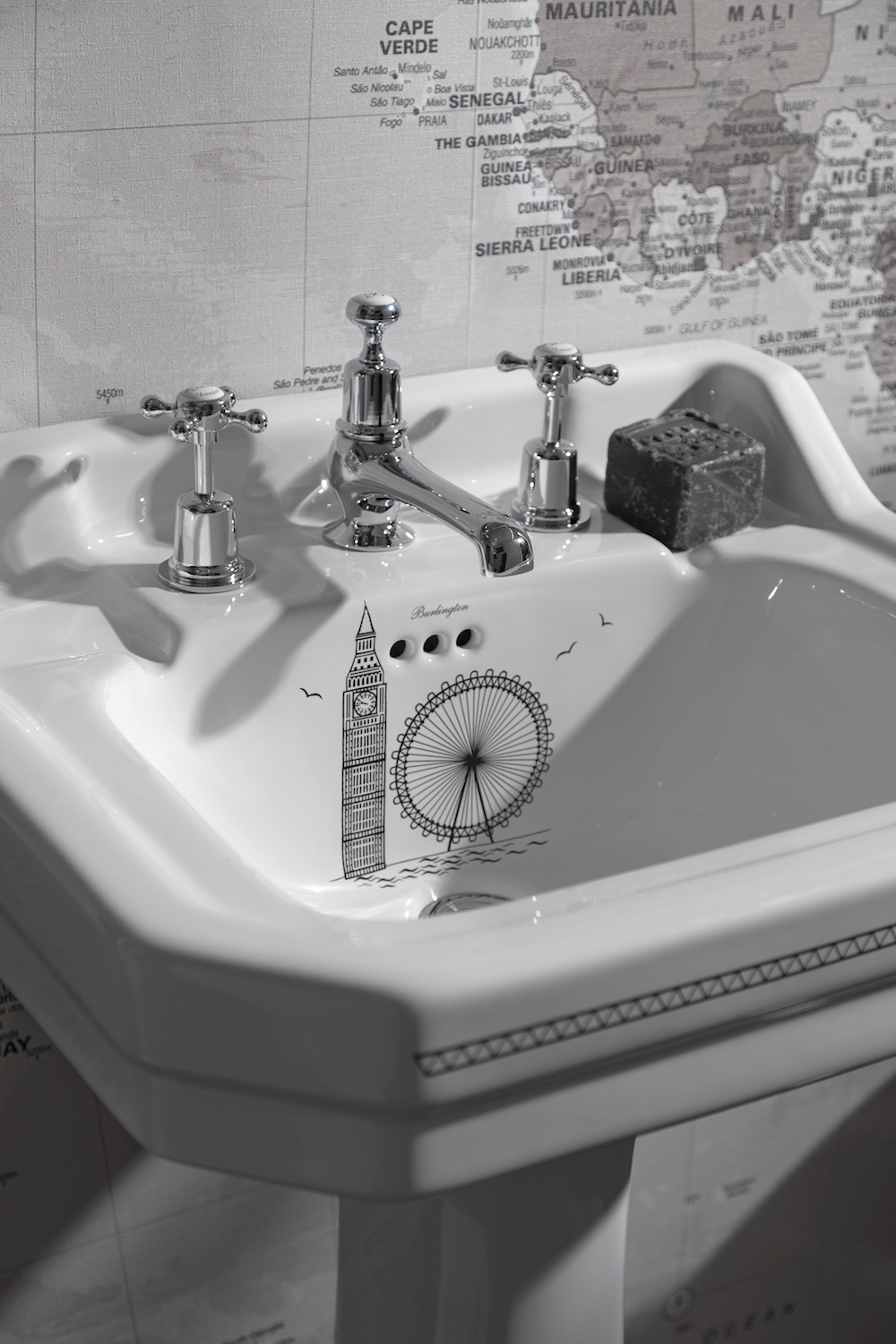 Image caption: Cityscape (London) from the Bespoke by Burlington collection 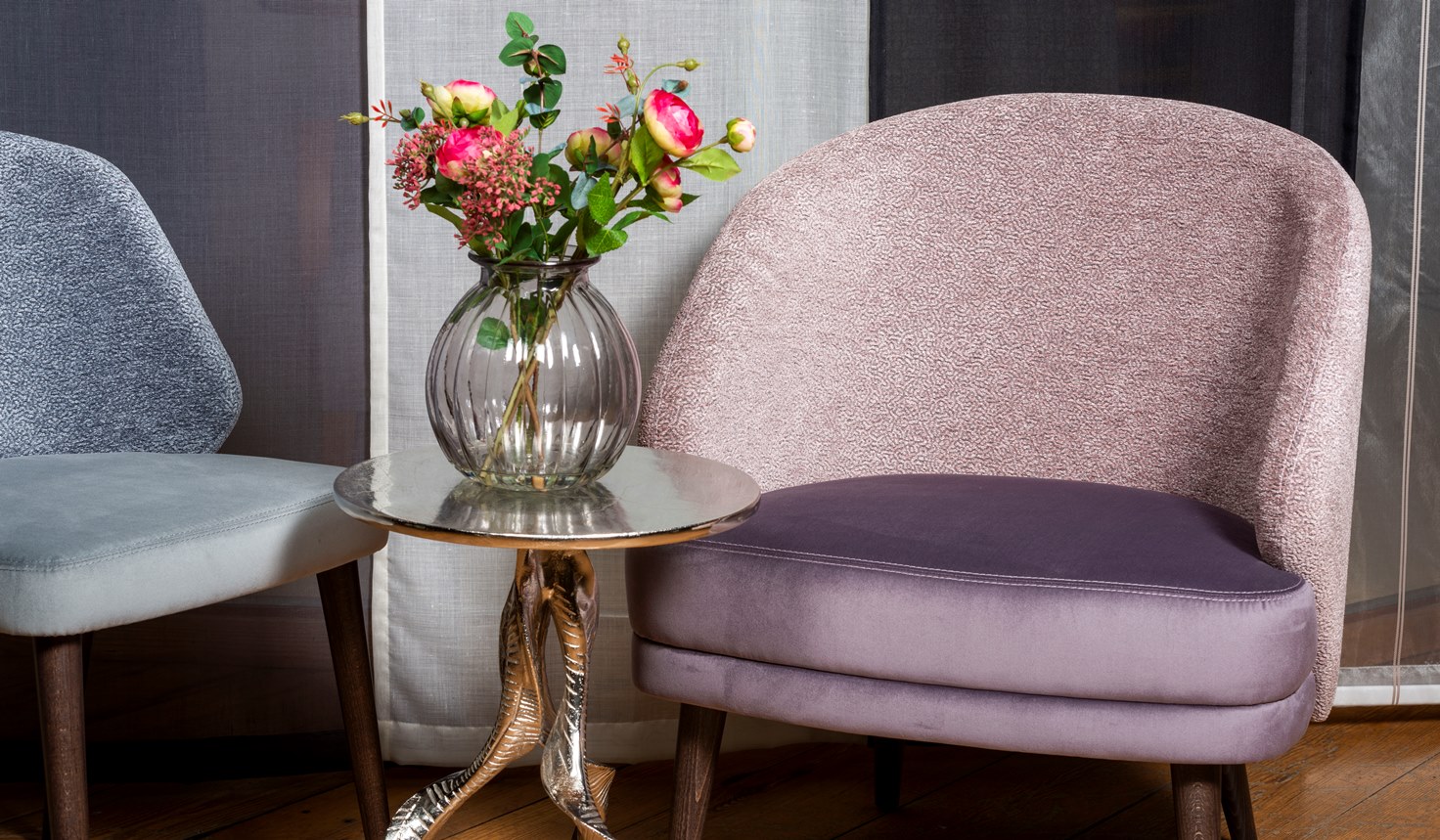 Soft, meandering upholstery fabrics with a subtle vintage look and elegant decorative feel, Amaze is the most recent upholstery quality to join the Skopos portfolio. Aimed at hospitality and leisure interiors, the collection adds a simple decorative finishing touch, without being too elaborate or ostentatious.

The collection of 22 SKUs is produced using tactile chenille yarns, with a ‘maze’ design textured relief twist. The palette is a sophisticated mix of heritage colours.

Amaze (pictured) has been specifically designed for contract furniture and is back-coated to Crib 5 (BS5852) and achieves IMO standards, ensuring its suitability for marine and all contract environments. Amaze achieves 100,000+ Martindale rubs, providing longevity in high traffic areas, meeting the needs for severe contract.

Defining the signature styles of many flagship hotels and cruise-liners, Skopos are dedicated to design, service and best performance. Our full service or fabric only option provides choice for our customers, with expertise in design, make-up (curtains, cushions and bedding), fitting and installation. Our Bespoke design and colour matching service provide the opportunity to create unique solutions.

View the Amaze collection on the Skopos website:  skoposfabrics.com 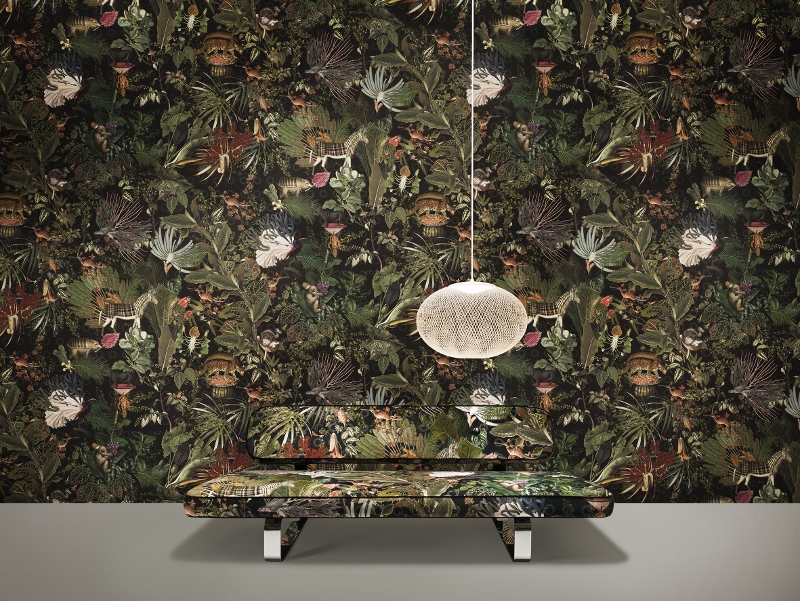 Launched at Deco Off in Paris, the Extinct Animals wallcoverings range is the result of a unique collaboration with Arte and Moooi. Both leading brands have launched the collection in order to celebrate nature’s diversity, stimulating to stretch the limits of imagination.

Within the Extinct Animals wallcovering collection, each pattern is inspired by the characteristics of one extinct animal. Striking combinations of colours, features and patterns of its fur, plumage or skin bring it vividly back to life on the walls. The collection that follows popular demand within the industry for art outside the frame, features designs within the wallcoverings that narrate a story; others stimulate our senses using imagery and textures. The animals that time has forgotten that have been depicted within the range include:

Printed wallcovering with a flock finish, inspired by the delicate features and royal appearance of the Aristo Quagga.

Wallcovering with gauze and Japanese paper, representing the shiny coat of the Armoured Boar. The upper part of its body was covered in black and golden scales, which gave it an ornamental appearance.

3D wallcovering with a soft suede look, inspired by the Dodo Pavone’s natural outfit – a soft plumage of silvery feathers with different nuances of grey, blue, beige and white.

Printed wallcovering with a flock finish inspired by the mysterious Blooming Seadragon, who evolved spectacular leaf-like appendages in yellow, brown and green as a clever camouflage.

Soft suede 3D wallcovering, based on the unique structure of the ancient skin and the typical grey-brown folds that section the Dwarf Rhino’s body, bearing the appearance of a suit of armour.

Wallcovering with a textured print, based on the magical skin of the Umbrella Squid which was covered in bioluminescent ‘jewels’ that changed colour to match its surroundings.

3D wallcovering with a satin look and a pattern resembling the pectoral fins of the Flying Coral Fish, shaped like delicate, thin and translucent wings.

Printed wallcovering with a flock finish, resembling the beautiful fur of the Blushing Sloth, which lived its life so still and quiet that algae found a way of growing on the outer layers of their fur, giving them a breath-taking glow.

Wallcovering with a high gloss lacquer print, representing the elegant tail feathers of the female Calligraphy Bird that ended in what resembled graceful calligraphy swirls.

Foil based wallcovering lined with cork and a flock finish, based on the fur of the Bearded Leopard – pale yellow to deep gold, and a dark constellation of rosebuds adorning it.

A fantastic fauna print – digitally printed on soft touch textile with a non-woven backing – in which each of the 10 extinct animals are mysteriously hidden.

Moooi is the extraordinary design brand founded by Marcel Wanders. For more than a decade the brand has inspired and seduced the world with sparkling and innovative creations. This brand presents creative luxury for a well curated life. Innovative, provocative & poetic at the same time.

Arte achieved international fame as a designer of the most luxurious and sophisticated wallcoverings. Known for their superior quality and exquisite designs, Arte wallcoverings adorn the walls of residential homes and project interiors all over the world. Inspired by each other, Moooi & Arte created the luxurious wallcovering collection Extinct Animals. 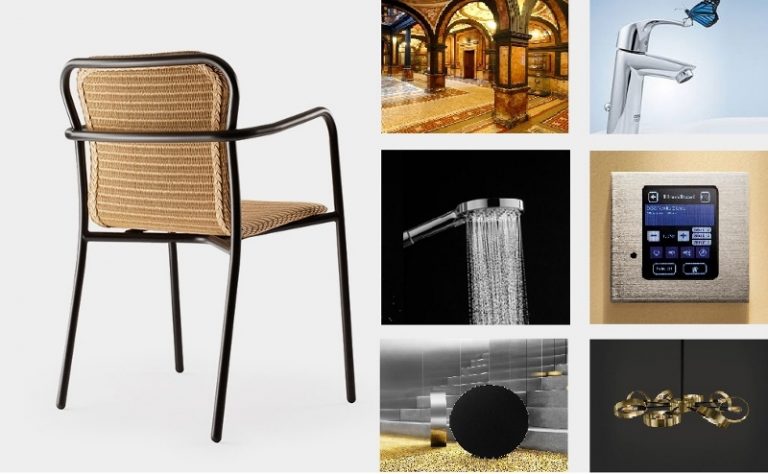 Spotlight On: A Year In Review (products)

Throughout December, Hotel Design’ Spotlight On will be throwing it back to the major products that have launched over the last 12 months…

Next month, as the industry starts wrapping up the year, Hotel Designs will be giving you the ultimate throwback, highlighting the major products that dropped in the hotel industry this year.

By revisiting this year’s international trade shows – including Milan Design Week, Clerkenwell Design Week, Decorex, 100 % Design, designjunction and SLEEP + EAT – we will bring you all the hottest product launches.

We will cover everything from the idea of personalised lighting to new bathroom furniture, impressive carpet collaborations to apps that allow consumers to purchase items in the hotel (and everything in between). Hotel Designs will be celebrating the products that have launched to become gamechangers in 2019 and the international hotel design.

If you wish to find out more, or know of a product that we should be talking about, please contact Zoe Guerrier on 01992 374059 or z.guerrier@forumevents.co.uk

Making its debut at London’s Independent Hotel Show on 16-17 October 2018 is DLAppTap. This is an innovative iPhone and iPad app that allows hotels to easily sell their beautiful products to guests in their properties without the need for in-house retail operations. With DLAppTap, hotels can capitalise on new revenue streams, achieve ROI from refurbishments and improve and provide higher levels of guest-centric services.

The new hospitality-focused tool is an extension of the soon-to-be-launched DesignLife App, which, as the video below demonstrates, was developed to showcase residential products. The iOS app becomes a platform for individual hospitality venues thanks to encoded Near-field Communication (NFC) labels, which are discreetly attached to items available for purchase. After downloading DLAppTap, guests can view the specifications, measurements, costs, lead times, shipping and payment options for any labelled item they “tap” with their mobile devices. Purchases can even be added to their guestroom bills. Orders are automatically sent to manufacturers, with the hotel receiving 25 per cent commission.

“Hotels are the shopping centres of the future,” says Jane Moriarty, founder of DesignLife Associates, Ltd. and marketing director of DLAppTap, “and this technology is set to revolutionise the retail aspect of hospitality.”

Visitors to the Independent Hotel Show can test the app for themselves at the Hotel Room of the Future exhibit conceived by Two’s Company Interior Design. To demonstrate that the labels will not distract from aesthetics, nearly every item in the concept stand will be discreetly tagged with nano-thin, film-like NFC stickers that store data and draw energy from mobile devices. Pieces to be encoded include the Nexus Armchair and two-seater sofa from Knightsbridge Furniture, with JAB Anstoetz’s Hideaway textile collection used for upholstery, curtains and accessories. Various items are crafted by Splinter Works, MRF Design and Langstaff-Ellis, the company building the room’s wardrobes. Minibar facilities are from A3 Solutions, and lighting from Heathfield & Co. Accessories from Cocoon Interiors and Buwier will be tagged, and even toiletries and bed linens from The Fine Cotton Co. These can all be scanned by visitors wishing to test the technology on their own devices.

Not only does this solution help guests get “the look” of their favourite hotel for their own homes, it also offers numerous benefits to hoteliers, designers and product suppliers:

The DLAppTap team manages the retail process: establishing supplier trade accounts; uploading all product specifications to the app; determining if products require minimum quantities in order to be sold; and managing the guest experience when using the app.

Justin Kandiah, managing director of DLAppTap, says, “Not only does DLAppTap have the potential to turn hospitality retail on its head, it is also a win-win solution where guests’ homes have reminders of their treasured holidays, and the hospitality industry has a streamlined way to give guests what they want, increase revenue and build their brand awareness.”

The Independent Hotel Show with the Hotel Room of the Future takes place at Olympia London 16-17 October 2108.

Hotel Designs is a proud media partner of the Independent Hotel Show. Chelsom are very pleased to announce the launch of the stunning new Furniture Collection 2017.

INTRODUCING THE NEW WEBSITE
Not only does the website enhance the catalogue aesthetically, it has also been designed with navigability and functionality at the forefront. Every product is shown online and the whole catalogue can be downloaded in pdf format.

For further information or to request a catalogue please contact the dedicated furniture team at furniture@chelsom.co.uk or call +44 (0) 1253 831450.