Ruby Hotels, which shelters the well-known ‘lean luxury’ hospitality concept, has opened a 186-key hotel in Cologne.“Ruby goes Late-Night” is now the motto at Ruby Ella – and becomes the brand’s 11th hotel property…

Ruby Hotels, the Munich-based hotel brand that first launched in 2013 with the innovative ‘Lean Luxury’ philosophy, led by hospitality pioneer CEO and Founder Michael Struck, has opened its first hotel in the city of Cologne. Ruby Ella, the 11th hotel of the Ruby Group ,designed by Matthew Balon, is located in a prime downtown location: the former Capitol area, famous for its rich history in TV studios and entertainment.

The hotel group already has a strong portfolio in Germany, with properties in Munich, Hamburg, Stuttgart and two hotels in Dusseldorf. In recent years, Struck and his team have been acquiring properties outside continental Europe, entering the UK hospitality arena with opening of Ruby Lucy on London’s Southbank. And the narrative continues to unfold… the brand is now expanding into Asia with the joint venture Ruby Asia, founded in 2018.

The 186 rooms are spread over six floors and take guests into the legendary world of late-night shows, paying homage to Cologne’s status as the most important media location in Germany. The public areas with check-in, bar & café are located on the first floor of the impressive new building, which is ideally situated in the city centre on the Hohenzollernring and in the immediate vicinity of the trendy Belgischen Viertel. As in all Ruby Hotels, the Ruby Ella Bar is open 24 hours a day for Cologne locals and provides an enrichment on the Hohenzollernring nightlife mile. Where once iconic German hosts like Harald Schmidt and Stefan Raab offered late-night shows of the highest class, today the Ruby Ella Show presents itself. Large illuminated signs, a typical stage with talk show host desk & guest chair, a colourful mix of vintage furniture and quite a few props from the cult late-night show times of the 90s can be found in the public areas. Highlights include an original camera crane, the eight-meter-long “Show Time” vintage lettering on the ceiling and the show band instruments suspended in front of it.

The centrepiece is the 24/7 bar with its quilted turquoise leather fronts that echo the typical look of old leather chairs and contrast excitingly with red marble and raw brass. Urban charm is provided by the open concrete walls that run throughout the hotel and rooms. These also show the typical Ruby signature: high open ceilings, fresh bright white, glass rain showers integrated into the room as well as wooden wall paneling and high-quality oak floors. The design highlight above each bed is the “Late-Night” moon lamp whose cable depicts the skyline of Cologne.

The new building, set back in the quiet courtyard of the former Capitol, is located in the heart of Cologne. In addition to numerous restaurants and cafés, there are opportunities for shopping, as well as several cinemas and clubs, making the Hohenzollernring one of the most popular promenades, especially among young people. It takes five minutes by public transport from Friesenplatz to the main train station and 25 minutes to Cologne/Bonn Airport.

The building, designed by architect Christoph Ingenhoven according to the highest sustainability standards, is impressive even at first glance. A particular eye-catcher are the almost 100 trees and shrubs planted in a staggered pattern on the hotel. The planting concept came from Swiss landscape designer Enzo Enea. Cologne-born Daniel Suré is taking over the management of Ruby Ella. The experienced hotel manager has already worked in renowned hotels in Switzerland and Germany. “The location of our Ruby Ella between the Belgischen Viertel and the Gerlingquartier is perfect for discovering the Cologne lifestyle on your own,” said Suré. Whether on a business trip or a city break, in just a few steps you’re right in the middle of the action.”

The hotel and rooms follow Ruby’s Lean Luxury philosophy: a location in the heart of the city, top design and high-quality amenities with the essentials, and remains an affordable option, by consistently dispensing with superfluous and non-essentials. “This works because, following the example of modern luxury yachts, we accommodate our luxury in a relatively small area and simply leave out non-essentials,” explained Struck. “We also organise ourselves with the help of our own technical solutions in a completely different way than is usual in the industry. We plan and build more modularly, centralise more strongly and automate consistently behind the scenes. This helps us to make a luxurious and unique hotel experience affordable for our guests.” 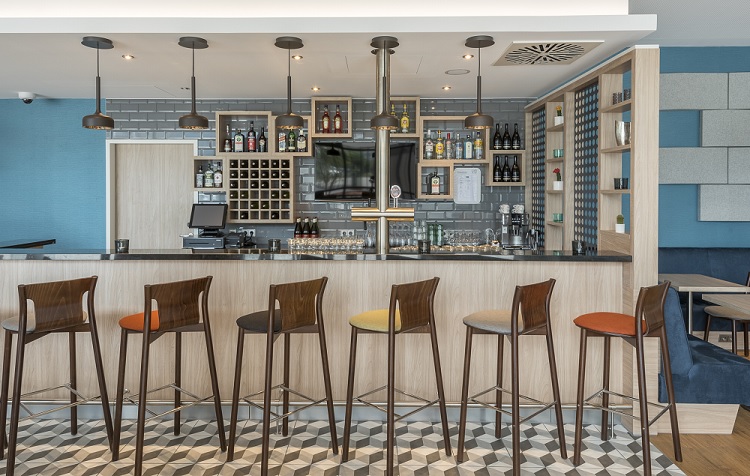 The largest Holiday Inn Express in Europe has opened in the heart of Cologne, InterContinental Hotels Group has announced, with the Cologne City Centre property.

Ideally located, the hotel is walking distance to the Old Town or a short U-bahn ride to the famous twin spires of Gothic Cologne Cathedral tower.

Within a short distance of Poststraße and Severinstraße U-bahn stations, as well as the city’s Central railway station. If flying in or out, Cologne Bonn Airport is only 25 minutes’ drive away.