Brintons supplied carpets for key public areas within Kimpton’s first London hotel, formally known as The Principal London. Sheltered within a Grade II listed landmark building, which now dominates the area as a five-star hotel on the eastern flank of Russell Square in Bloomsbury, the now Kimpton Fitzroy London, which re-opened as The Principal London in April 2018 after undergoing a multi-million pound renovation and only recently rebranded as an IHG hotel, features a bespoke, contemporary carpet design in the key public areas within. The pattern features a strong linear border, bringing a modern element that harmonises with the period of the building.

The interior design renovation was led by Tara Bernerd & Partners and Russell Sage studio. The designers chose to use cream drapery with light and feathery fabrics and featured artwork that responds to the Bloomsbury neighbourhood’s artistic and literary heritage. Working in harmony with the design brief, Brintons created 4,600 sqm of bespoke carpets for the hotel’s corridors from floors one to eight, including the main staircase and the gallery. The carpet features a steel grey and neutral colour palette, which complements the sophisticated and contemporary interiors. 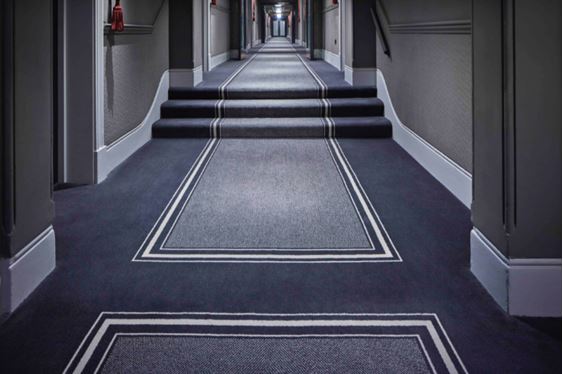 The three-year renovation, overseen by the Principal Hotel Group, has successfully maintained many stylistic elements of the hotel’s exciting past through the interior décor. The hotel features more than 300 rooms and suites and is close to many central London destinations, including the British Museum and Lamb’s Conduit Street.

The newly unveiled Kimpton Fitzroy London is named after the original architect of the building, Charles Fitzroy Doll, a significant figure of British architecture in the Victorian and Edwardian eras. Next year will see even further growth of the Kimpton brand, with additional openings in tier-two cities including Edinburgh, Glasgow and Manchester. The brand also recently announced its debut in Bangkok, which is slated to open in 2020.