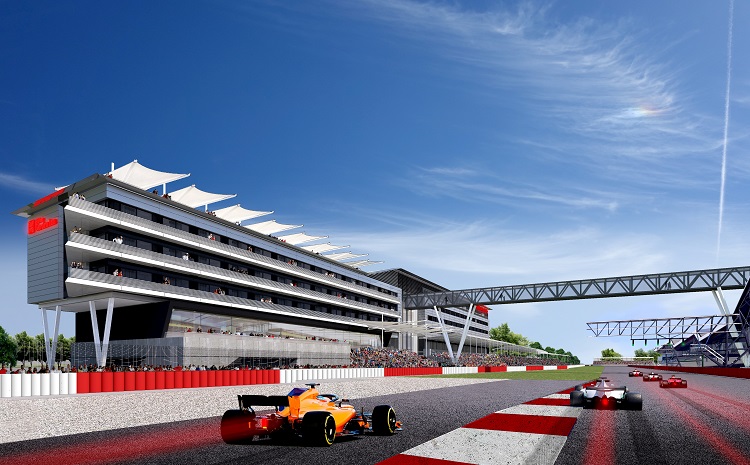 The announcement of a new Hilton-branded hotel to open at Silverstone, the home of the British Grand Prix, further solidifies the hotel design industries long-standing relationship with the automotive industry.

The 197-room Hilton Garden Inn Silverstone, which is slated to open in 2020, will feature balconies that will overlook the circuit from the hotel, allowing customers to watch the race from their rooms.

In addition, the hotel will also feature a rooftop terrace as well as connecting directly to the Silverstone Wing pit and paddock complex via a bridge over the straight.

Peter Prickett, CEO of Bricks Capital Ltd which has agreed a management deal with Hilton, said the site is “an outstanding location” for a hotel. “The Wing, which will have direct access to the hotel, has helped elevate Silverstone to more than just a racetrack,” he said. “Our partnership with Hilton and the opening of Hilton Garden Inn Silverstone will enhance the circuit’s appeal, offering quality hospitality year-round.”

Silverstone hosts Britain’s round of the Formula 1 world championship. The circuit’s managing director Stuart Pringle says it expects the number of annual visitors to increase from 1.5 million to more than two million by 2020 when the hotel is expected to open.

Patrick Fitzgibbon, senior vice president, development, EMEA, Hilton Hotels said of the news: “Silverstone held the very first British Grand Prix 70 years ago and has continually hosted the event since 1987, drawing hundreds of thousands of spectators and millions of viewers around the world each year. Hilton embodies the venue’s racing legacy with a long-standing partnership with the McLaren Formula 1 Team. We are privileged to open a hotel in such a prominent location on the circuit and we cannot wait to begin welcoming guests to this iconic location.”

The home of British Grand Prix racing will be the latest sporting venue to house a Hilton branded hotel. In addition, the international hotel giant operates more than 30 stadium hotels globally.