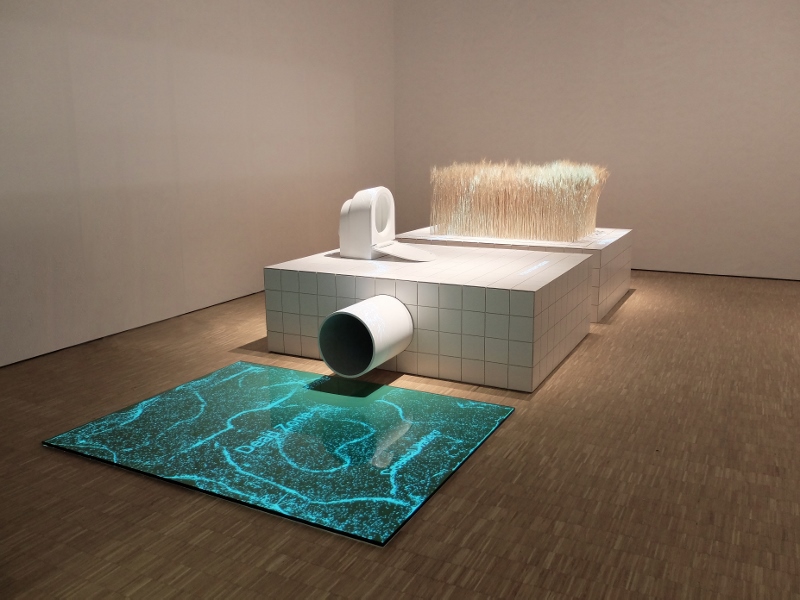 LAUFEN has made a contribution to the initiative of Austria at the XXII International Exhibition of La Triennale di Milano. Broken Nature: Design Takes on Human Survival is the title of the thematic exhibition that explores the bonds between mankind and the natural environment, bonds that over the course of time have been deeply compromised or even destroyed.

Through projects of architecture and design on different scales, the exhibition explores the concept of design reparation as a solution through which to reinterpret the relationship between human beings and the context in which they live. This year for the first time La Triennale assigned the Bee Awards, created to reward the three worthiest international contributions to the XXII Triennale. Austria is the winner of the Black Bee, for its profound interpretation of the theme and the quality of its presentation.

“LAUFEN has made a substantial contribution to the project and to the video CIRCULAR FLOWS: The Toilet Revolution!”

A leader in its sector with over 125 years of experience, LAUFEN worked together with highly acclaimed Vienna-based design studio EOOS to develop an innovative project that promises to become an important breakthrough on the global scene. Thanks to its exceptional expertise in the design and production of bath fixtures, driven by constant research and technological experimentation, LAUFEN has made a substantial contribution to the project and to the video CIRCULAR FLOWS: The Toilet Revolution!. Supported by the Federal Chancellery of Austria and commissioned by MAK, the Museum of Applied Arts of Vienna, it all started with the long-term research of Eawag, the Swiss Federal Institute of Aquatic Science and Technology, and the grant of the Bill & Melinda Gates Foundation. The studies demonstrate that current practices of waste water treatment play a significant role in unbalancing the nitrogen cycle, with major repercussions on the ecosystem and the health of human beings and other living things, consequences that will become more evident over the short term. New hygienic-sanitary solutions represent the future in the construction of intelligent cities with more healthful, sustainable characteristics.

The collaboration between studio EOOS and LAUFEN has led to save!, a revolutionary toilet prototype for the separation of urine, offering an effective solution in the battle against the global problem of excess nitrogen, in line with the principles of systemic design. The separate treatment of urine means reducing – in an intelligent, economical way – the quantity of nutrients (such as nitrogen and phosphor) and pollutants released in the waters of the planet.

Up to 80 per cent of the nitrogen found in sewage can be removed from the wastewater stream, which will in turn reduce the resources required to operate treatment plants. Where others have failed in the past, save! represents a design challenge successfully met, raising excellent prospects for the future. In the achievement of these objects, the contribution of LAUFEN to the project has been fundamental, thanks to the deployment of unprecedented know-how. The Swiss company relies on an extremely advanced research and development centre, the only one in the world capable of developing such an innovative idea. At the same time, it boasts a production system capable of making the save! into the toilet of the future, according to the most advanced industry standards.